By PAUL KEANE
Special to the Herald
A 22-year-old Greene County man was sentenced on Monday to a total of 25 years in prison after taking responsibility for a fatal wreck that claimed the life of a former schoolmate last year.
Joseph Talton (Joey) Beard, of Leakesville, was sentenced by Special Appointed Circuit Judge Steve Simpson in front of a packed, standing room only courtroom on Monday.
Beard pled guilty to charges of DUI Causing Death and Tampering with Physical Evidence. Judge Simpson sentenced Beard to 25 years on the DUI charge and 10 years on the tampering charge. The sentences will run concurrently, and he was also ordered to pay all related court costs. Judge Simpson issued the maximum penalties in the case, something that prosecution had requested. The packed courtroom saw three defense witnesses ask the judge to consider a sentence less than the state’s recommended maximum, with two representatives of the family of the deceased supporting it. Beard did address the court and asked the judge to allow him to speak directly to the family of Lauren Elizabeth Norris, the 19-year-old who was killed in the March 24, 2017 incident. Beard said he wanted to apologize for the harm he had caused. The charges stemmed from the March 24 incident where Beard was driving his vehicle under the influence of alcohol. He failed to stop at a stop sign at the intersection of Alice Road and Miss. 63 in the Jonathan Community. As a result, he struck the vehicle driven by Norris, killing her upon impact. Norris was the Salutatorian of her graduating class, was attending college to obtain a nursing degree and was preparing for her wedding at the time of the wreck. According to testimony during the proceedings, after the wreck, Beard attempted to persuade the three passengers that were in his vehicle to hide marijuana and an ice chest containing alcohol so that investigating officers would not find it. Beard’s blood was drawn just over an hour after the accident and a second time roughly two hours later. In both instances, District Attorney Tony Lawrence told the court, Beard’s blood-alcohol content was over twice the legal limit.
Beard was originally indicted by a Greene County Grand Jury last August on a charge of second degree murder. In that indictment, the defendant was accused of killing Norris “during the commission of an act eminently dangerous” and with a “depraved heart” after he ran the stop sign at a high speed at a time when he “had alcohol in his system.”
“On March 24, 2017, tragedy was visited upon Greene County,” Lawrence said. “Lauren Norris, 19 years old, was one of Greene County’s finest — Salutatorian of her class, studying to be a nurse, engaged to be married and loved by her family and all who knew her. She lost her life because another one of Greene County’s rising stars decided to drink and drive.”
“This incident has horribly affected both the victim’s and the defendant’s families, along with the Greene County community. It is a case that will stick with me for the rest of my career. There are no winners in this case. There will only be lasting pain, memories and lost futures. I hope this case will show our youth that speeding and drinking and driving will cause lasting damage to innocent families and to the whole community.”

RECOGNIZE YOUR GRADUATES with a customized Class of 2020 lawn sign

Got weeds? Consider what the experts do with their own lawns 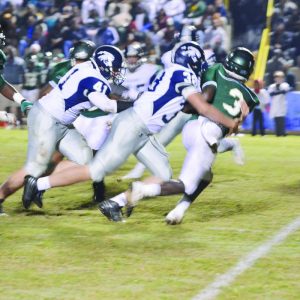 Past due rent leads to shooting