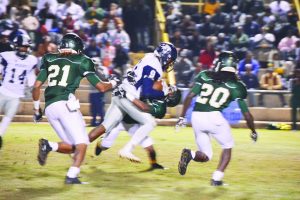 Senior standout P.J. Grayson is shown making a strong run in his last football game for Greene County on Friday.