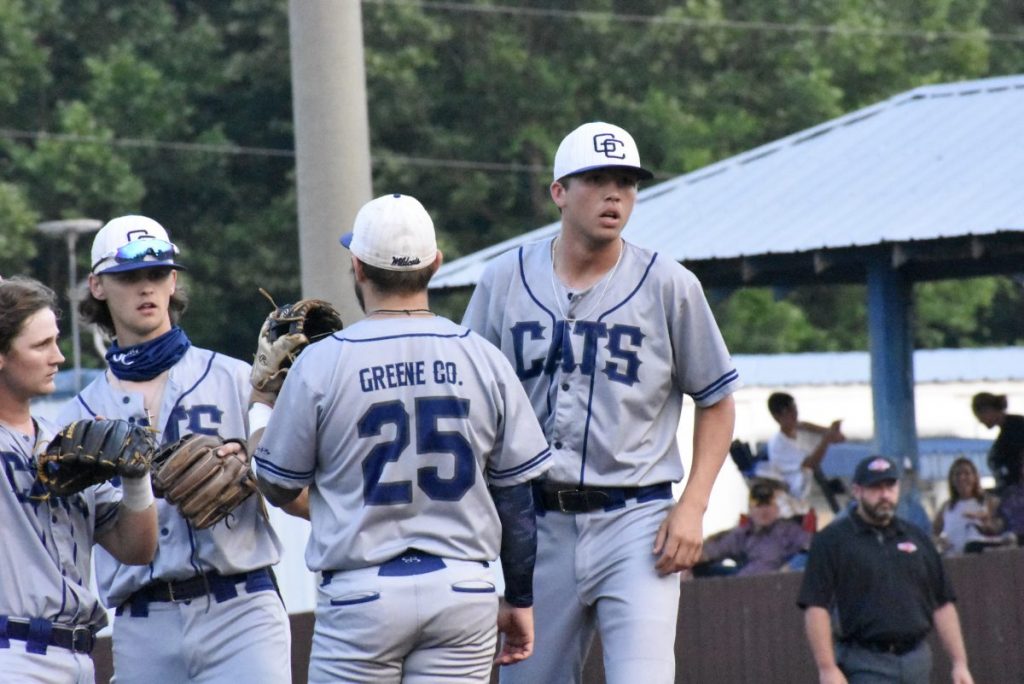 GCHS senior pitcher Garrett ‘Bunky’ Henderson is shown (right) being congratulated by teammates coming off the mound after a strong inning of work in Game 3 on Monday.
Photo by RUSSELL TURNER / Herald Editor

No, the Wildcats did not claim the Round 3 series. They came up just short, falling 5-3 in a back-and-forth Game 3.

Like most coaches, Chatham isn’t big on ‘moral victories’, but watching his team slug it out with a team that entered the series unbeaten on the season and ranked in the Top 10 in national polls, reinforced what he believed all along.

“No doubt about it; we came in here expecting to win,” said Greene County coach Nick Chatham. “We told the kids before the game that this series started with people saying it was David vs. Goliath, but it turned into Goliath vs. Goliath.”

“I believe these guys proved without a doubt they are one of the best teams in 4A baseball in Mississippi. I’m so proud of them and what they’ve accomplished. It’s been a great run.”

The Wildcats were well-versed in third games coming into Monday’s climactic contest, having won the deciding game in their previous two series against Poplarville and Quitman, and they played against Sumrall like a team that believed they belonged in a championship setting.

“We have bracelets we wear with GRIT written on them, and if I had enough, I’d give (Greene County) the bracelets too, because that’s a gritty team,” said Sumrall coach Andy Davis. “Coach Chatham does an unbelievable job with that program.

“They fought us tooth and nail. It’s sad that they had to go home.”

Monday’s game lived up to its billing, and then some, in front of a loud, standing-room-only crowd estimated at a little over 1,000 in attendance (including a very strong following from Greene County) and over 1,000 more reportedly watching Sumrall’s online broadcast. The other two games drew big crowds as well and it is hard to imagine a more exciting and electric atmosphere than the fans at Scott Bray Field and Larry Knight Field experienced during this series.

“It was an incredible series,” Chatham said. “It had all the drama, the big hits, the big plays, the missed opportunities. We put ourselves in a position to win and we had our chances, but unfortunately, we just didn’t pull it out.” 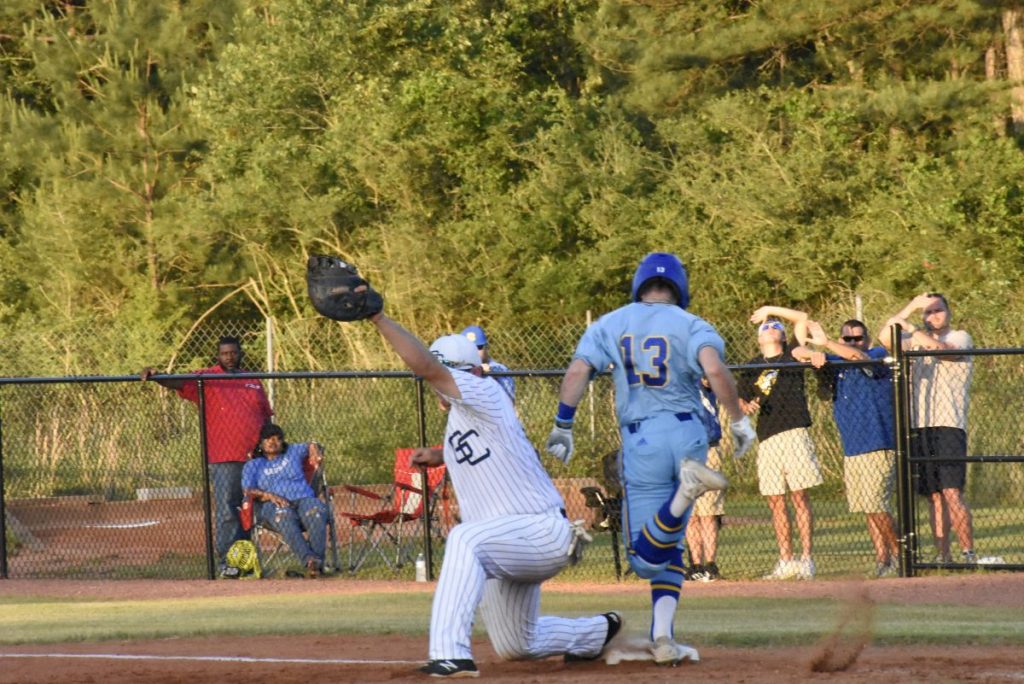 Junior first baseman Phillip Herring is shown making a nice stretch and catch for an out at first in Game 2 at home on Saturday.
Photo by RUSSELL TURNER / Herald Editor

Down to the wire

Wildcat senior left-hander Garret Henderson had been solid for the Wildcats throughout the playoffs, giving Chatham exactly what he needed all three of his appearances leading up to Game 3. That didn’t change Monday as he and Sumrall’s senior Marshall Phillips locked up in a brisk pitcher’s duel through the first three innings.

Henderson retired the first eight batters he faced on just 28 pitches, then surrendered a hit-batter and a walk before getting out of the bottom of the third. Phillips struck out six batters in the first three innings, but the Wildcats had him on the ropes in the top of the third after walking the bases loaded. But Phillips got out of the jam with a pair of strikeouts.

It was a trend that would haunt Greene County all night, as the Wildcats also left the bases loaded in the sixth and seventh innings.

“We came up a little bit short tonight,” said Wildcat junior Collin Pipkins. “We’ve been leaving a lot of runners on base, and that’s been one of our main problems this year. Tonight, that cost us. But we’re going to work on it next year and see if we can’t come back after them again.”

Greene County finally broke through in the top of the fourth, scoring all three of its runs, and taking advantage of Phillips’ inability to consistently find the strike zone.

Wildcat senior Conner West got the ball rolling in the third with a single for the first hit of the game by either side. Three walks drove in a run and left the bases full for Pipkins, who doubled to give GCHS a 3-0 lead and set the big GCHS contingent ablaze.

Greene County had two golden opportunities to score in the final two innings, due to wildness on the part of Bobcat pitchers. Phillips, who left the mound with one out in the third inning, came back in relief after the Wildcats got two men on in the top of the seventh. Phillips’ first pitch went all the way to the backstop for a wild pitch that moved the runners over, then a walk loaded the bases. However, he followed that with three straight strikeouts to have the unusual distinction of saving a game he had started.

In all, Sumrall pitchers walked 12 batters, but only surrendered three hits.

“They just made big pitches,” said Chatham. “We had too many strikeouts in big spots. If you take away a couple of those strikeouts with the bases loaded, it’s a different game.”

“It was a crazy series overall. I would have never believed you if you had told me we would walk a dozen batters in Game 1 and win and Sumrall would give up 12 walks in Game 3 and win. But, that’s what happened.” 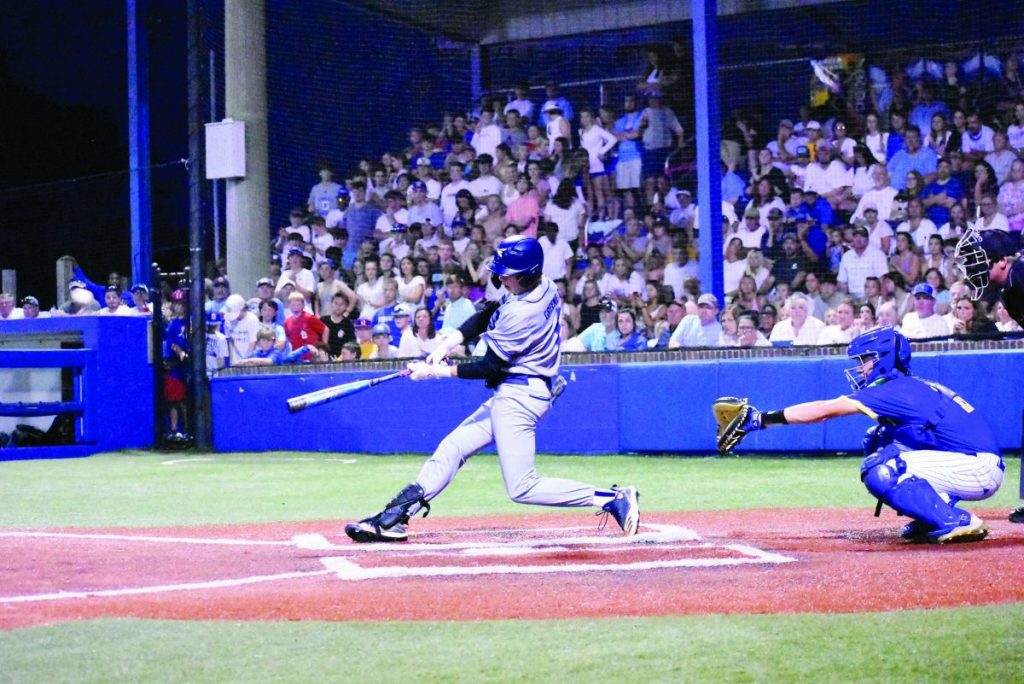 Greene County junior Collin Pipkins is shown connecting on a 2-run double on Monday at Sumrall. With over 1,000 in attendance, the game, which GCHS lost 5-3 had the energy and atmosphere of a state championship game.
Photo by RUSSELL TURNER / Herald Editor

Cats shock everyone, but themselves

Sumrall entered the series heavily favored to walk past Greene County to their second straight South State Championship Series. Very few outside the GCHS locker room and the Wildcat faithful in the stands gave them much chance of upsetting the undefeated Bobcats.

Chatham’s Wildcats didn’t care. They jumped on Sumrall with 13 hits, scoring three in the second inning, four more in the fourth, two in the sixth and an insurance run in the top of the seventh to win 10-7.

“Every time they scored, we answered,” said Henderson, who earned the win in Game 1 after three innings of relief work behind Pipkins, who got the start, but struggled with his command. Brewer, who took the loss in Game 3, earned the save in Game 1, recording the final five outs without giving up a hit.

Izayah Jordan had two hits and two runs scored and West added a hit, an RBI and a runs scored to finish among the team leaders.

Needing a win to force Game 3, the Bobcats came to GCHS on Saturday on a mission. They looked the part early, taking a 3-0 lead after the first two innings.

But, after giving up three runs on five hits in those two frames, starting pitcher Conner West settled in and recorded zeroes on the scoreboard the rest of the way.

Unfortunately, zeroes were all the Wildcats could muster at home against Sumrall’s Levi Odom. GCHS recorded just four hits (Pipkins led the way with two) and Sumrall made the three early runs stick for a 3-0 win.

West’s had the Wildcats’ best overall pitching performance of the series as he went the distance, striking out six along the way and walking just one. He allowed just four hits over the final five innings, and although he took the loss, kept the Cats bullpen in order for Game 3. 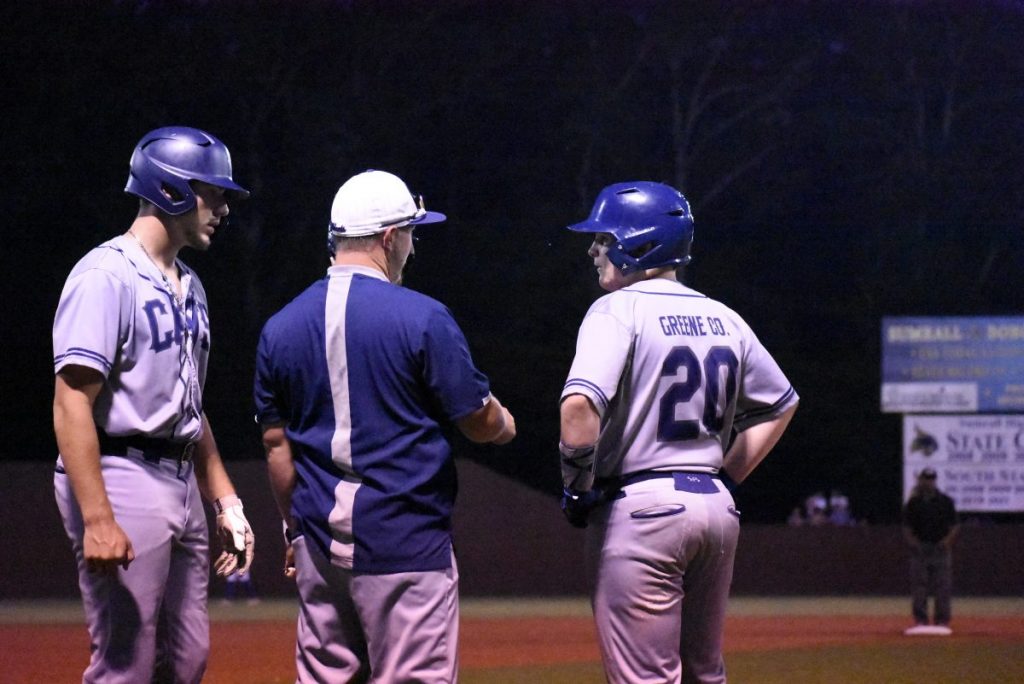 Head Coach Nick Chatham is shown talking with senior Cam Dunnam and sophomore Izayah Jordan during a break in the action on Monday at Sumrall.
Phot by RUSSELL TURNER / Herald Editor

Although Greene County fell short of adding another state championship trophy to the one the Wildcats brought home in 2003, Chatham said he believes this series reminded everyone not to overlook his program.

“I think we’re back; I think we’ve been back for the last few years now, and this series just kind of solidified that,” said Chatham. “So, we’re looking forward to next year.

“It really stinks for these seniors, but they’ve made a great run and a big impact on our program. We’re going to miss the heck out of them.”

That statement is hard to argue as the Wildcats will lose eight seniors to graduation later this month. They do have five regular starters returning and a lot of players who gained valuable experience this season, including during this pressure-packed series.

“What we accomplished this year was because of everyone,” Chatham said. “Every person on this team contributed this season.”

And just about every member of the team saw the field during this series. GCHS averaged 14 players seeing action in each of the three games, including 16 on Monday at Sumrall. Some of them were brief appearances, such as a pinch hitting or running opportunity, but the experience will matter, Chatham says.

“That has been somewhat of a constant for us this year,” he added. “We used a lot of players throughout the course of the season because we felt each of those instances gave us a better chance to win, but the experience gained will help in the future.”

Another constant Chatham is counting on is continued support from the community.

“The fan support and support we get from the community as a whole is huge for us,” Chatham said. “Being able to play in the environment we played in this weekend was very special, but our guys are accustomed to having good crowds behind them.”

“Those relationships and that support is something we hope to continue to build upon and foster. It is very important to the success of our players and our program as a whole.”