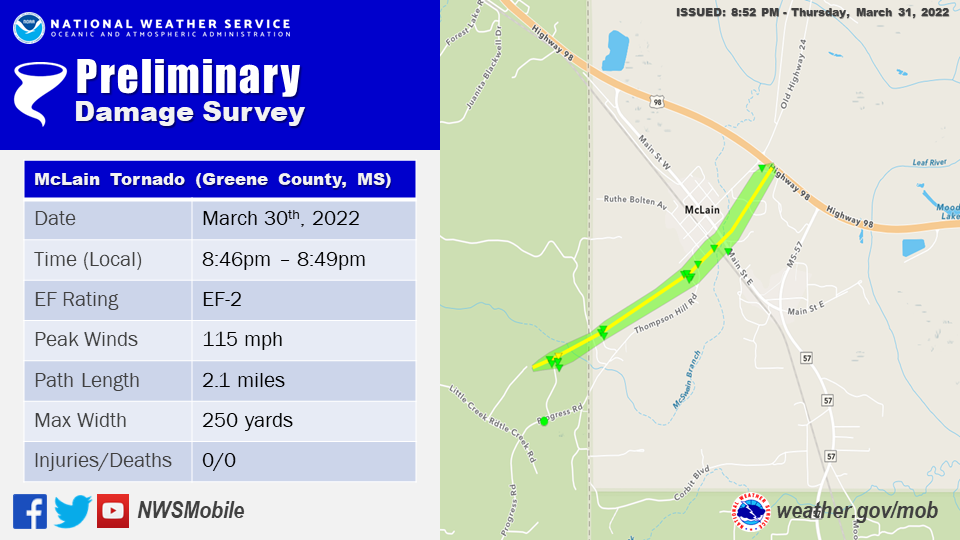 The National Weather Service has confirmed that a tornado was responsible for the storm damage suffered in the McLain area on Wednesday night.

The announcement, which came early Friday morning, confirms what residents who experienced the storm’s wrath firsthand and the public safety officials who have been documenting the damage already believed. According to information released to local authorities, NWS confirmed an EF-2 tornado that began in Perry County and crossed into Greene County during beginning at 8:46 p.m.

NWS officials said EF-2 damage was noted “just across the county line in Perry County with EF-1 damage noted in the McLain community.” The tornado had top winds estimated at 115 mph and stayed on the ground for approximately three minutes, covering a distance of 2.1 miles, with a maximum width of 250 yards. 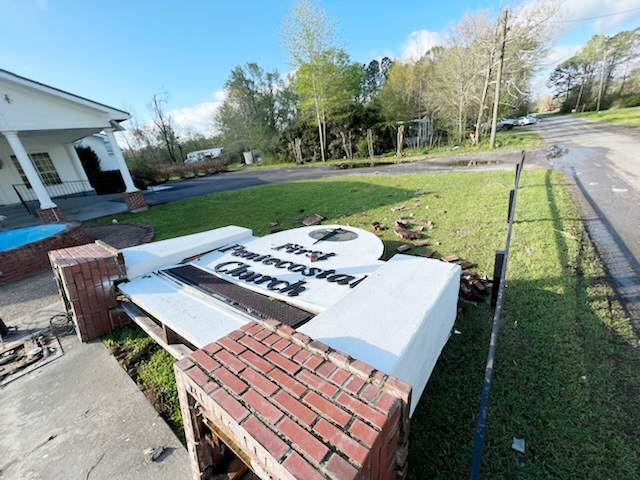 Local and state officials are continuing to assess damages in the county from a line of severe storms that brought isolated tornadoes and high winds across much of the Deep South late Wednesday. Most of the county escaped damages, but an unconfirmed tornado toppled trees and damaged several homes and other structures in McLain. No injuries were reported in Greene County, but two deaths in the Florida Panhandle have been attributed to the storm system.

Greene County Emergency Management Director Trent Robertson was on hand in McLain shortly after the storm passed through and was back in town early Thursday to begin damage assessments.

“So far, we’ve identified 11 homes affected, three of which had major damage,” Robertson told the Herald just after noon Thursday. “We had four homes with minor damage, 1 church affected and another church with minor damage.”

“We are trying to wrap up the initial assessment, but are encouraging anyone who had damage to self report it to MEMA. Otherwise, there is just a lot of cleanup to be done around the McLain area.”

Residents needing to self report damage can do by clicking on this link to the MEMA / Greene Co. Damage Assessment Self-Reporting Tool.

Along with the reports of damage in Greene County, reports indicate that a home just outside of McLain, but across the Perry County line, sustained major damage, with the roof reportedly completely torn from the home. The Herald spoke with Perry County EMA Director Colby Prine early Thursday as he was headed to the area to do a drone and on-ground assessment of the damage. That assessment was not available at the time of this report.

The high winds toppled numerous trees, causing power outages throughout the McLain area that persisted into Thursday afternoon. Crews with Singing River Electric Cooperative and Mississippi Power were on the scene working to restore power, but it was not clear how many homes were without power at the time of this report.

Across Mississippi numerous counties are reporting damage and as of noon Thursday three storm-related injuries had been reported in Noxubee and Holmes counties, but no deaths.

Initial damage assessments are underway and 21 counties in the state are reporting damage from the storms. The counties with the most severe impacts, according to preliminary reports from MEMA are Bolivar, Calhoun, Hinds, Warren and Yazoo.

In Florida, the Washington County Sheriff’s Office said Thursday morning that two were killed and two injured when a tornado touched down in the western Florida Panhandle.

The Mississippi Senate suspended its work Wednesday as weather sirens blared during a tornado watch in downtown Jackson. Some employees took shelter in the Capitol basement.

Rander P. Adams said he and his wife, Janice Delores Adams, were in their home near downtown Jackson when severe weather blew through during a tornado warning Wednesday afternoon. He said their lights flashed and a large window exploded just feet from his wife as she tried to open their front door.

“The glass broke just as if someone threw a brick through it,” he said. “I advised her then, ‘Let’s go to the back of the house.’”

Adams said the storm toppled trees in a nearby park, and a large tree across the street from their house split in half. “We were blessed,” he said. “Instead of falling toward the house, it fell the other way.” 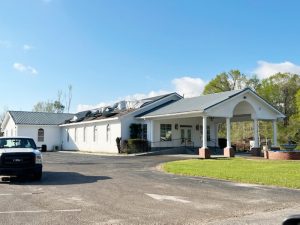 The tin roof on McLain Pentecostal Church was no match for the high winds that were part of Wednesday’s storm.
Photo by RUSSELL TURNER / Herald Staff

Earlier Wednesday, a tornado that struck Springdale, Arkansas, and the adjoining town of Johnson, about 145 miles northwest of Little Rock, shortly after 4 a.m. injured seven people, two critically, according to Springdale Mayor Doug Sprouse. The National Weather Service in Tulsa said Thursday that the tornado has been rated an EF-3, up from an initial assessment of EF-2, with wind speeds between 136-165 mph. The tornado reached a peak speed of about 145 mph and was on the ground for about eight minutes, according to the weather service.

A small tornado also touched down briefly on the eastern edge of Dallas, according to the National Weather Service in Fort Worth. The tornado struck just after 4:30 a.m. Wednesday near McClendon-Chisolm with top winds of about 100 mph and damaged homes, but no injuries were reported, according to the weather service.

Strong winds in Louisiana overturned semitrailers, peeled the roof from a mobile home, sent a tree crashing into a home and knocked down power lines, according to weather service forecasters, who did not immediately confirm any tornadoes in the state.