An aerial view of Street Racin’ Haven at dusk on Saturday shows the big crowd in attendance for the Grand Hustle Civil War racing event held at the track.

If you are a fan of outlaw street racing, Saturday was a great opportunity to check out some fast cars and get your fill of side-by-side racing action.

If you aren’t a fan of car racing, but happen to own a retail business near Leakesville, then this past week’s activities at Street Racin’ Haven was still a great opportunity to fill your cash register.

Street Racin’ Haven, the racetrack just outside of Leakesville, drew roughly 100 race teams and nearly 2,000 spectators this past Saturday for the Grand Hustle – Civil War (North vs South) racing extravaganza. With a $10,000 top prize on the line, the event created a lot of buzz on the street racing circuit and among local racing enthusiast.

Street Racin’ Haven owner Davy Busby said it was a good event for his track and the community. Oddly enough, however, this was an event that Busby had very little involvement with, other than being a fan.

“I got a call several weeks back from a couple of promoters from Andalusia, Ala. and Holt, Fla. looking for a new site to host a street racing event,” Busby said. “They wanted to lease the track for the event and expand out a little from their own tracks. Plus, they were looking for a true street racing setting and my track is a lot less polished than theirs and simulates street conditions better than theirs would.”

The setup was obviously a hit as Busby said over 1,700 people signed in at the gate, not counting the race teams or children that attended with parents. Racers came from all across the country and included teams from Illinois, Indiana, Texas, Florida, Georgia, Alabama, Louisiana and North Carolina.

In the end, a nitrous powered 1970 Nova, racing under the name The Goat, was the big winner, claiming the finale over a super-fast Firebird that had apparently been on a bit of a win streak of late. But, according to Busby, The Goat was the only big winner.

“This was the first time we had ever done anything like this,” Busby said of leasing out his facilities to another promoter. “It was great for us because they came in and handled everything. We were able to make a little money and relax and enjoy the racing.”

“Plus, these folks (racers and promoters) came in and they spent money in our town. I have talked to several local businesses that said they had a big impact at their locations.” 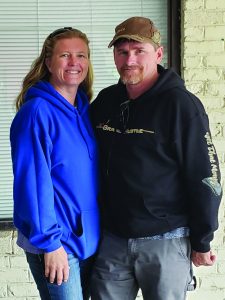 Racetrack owners Davy and Lavada Busby got the rare opportunity to sit back and enjoy the show at this past weekend’s races as they leased the track out to other promoters for the event.

Multiple business managers contacted by the Herald said Saturday was a big day for their businesses, citing pretty weather, the Black History Parade, the Distinguished Young Woman program and the races at Street Racin’ Haven as contributing factors to increased traffic in their stores. But for Gayle Howard, manager of Ward’s in Leakesville, the track patrons were the big difference.

“We had a tremendously big day on Saturday because of that track,” Howard said. “We were slammed by folks from the race track.”

“We were so busy I had to call late Saturday and schedule an extra delivery (of supplies) for Monday.”