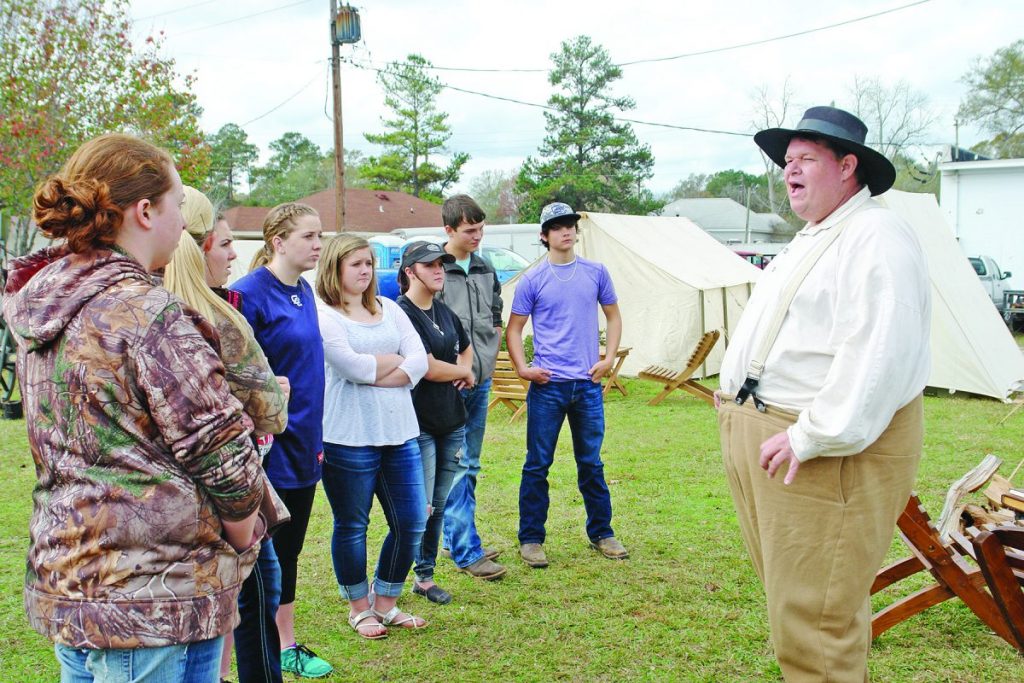 A reenactor is shown talking to county students at a previous Battle of McLeod’s Mill Student Day event in Green Park. The living history demonstration by reenactors will be part of combined Chickasawhay Historic Fest and Reenactment activities in Leakesville this weekend.
File Photo

The 5th Annual Battle of McLeod’s Mill Civil War Reenactment will take place this weekend with much of the action taking place in downtown Leakesville alongside festivities planned for the first-ever Chickasawhay Historic Fest.

The Main Street Leakesville Organization (MSLO) Promotions and Preservation committees have come together to combine these two events to create the Chickasawhay Historic Fest and Reenactment, which they hope to host as a combined event in coming years.

“This event is to celebrate the fascinating and changing history of Greene County and pull together stories of our county and the people of the past that gave our county shape and growth,” a committee spokesperson said.

The weekend will begin with the reenactors giving demonstrations and speaking with students for the annual school day portion of the event. Each year, students from around the county come face-to-face with the Civil War buffs for living history demonstrations meant to give a glimpse of life for combatants during the Civil War.

Local residents interested in hearing the stories from the reenactors themselves are welcome to attend a meet-and-greet planned for Friday night from 6-7:30 p.m. on Greene Ave. Residents and visitors can talk to the group and learn about their experiences and travels while sharing history.

A viewing of PBS’s documentary, 35-Million Years Down the Chickasawhay, will be held Friday and Saturday nights and will be open to the public.

“If you have not seen this film, make time to check it out,” the spokesperson added. “This film shows great detail about the river that runs the length of the county and has been a valuable resource for generations of people, from Native Americans to present day residents.”

The film will be shown on the stage at Green Park at 6 p.m. both nights. In case of rain, the film can be viewed inside Greene County Courthouse.

Saturday’s events will open up downtown for those wanting to experience the county’s history. Greene Avenue will come alive with Greene County history with an old-fashioned grist mill for grinding corn into meal and grits. Attendees can sample fresh fried pork skins and enjoy fresh produce and homemade jellies and jams, jewelry, flavorings, soaps and more. Crafts such as wood-working and sewing will be on display too.

Residents with the skills and a good recipe can try their luck in the cornbread baking contest. There is a $5 entry fee and a winner takes all prize for those will to put their cornbread to the test. Participants should submit their entries by 10 a.m. at the MSLO table on Greene Avenue. Attendees can come enjoy a bowl of turnip greens with cornbread for $5.

Reenactors will hold several activities throughout the day on Saturday, beginning with the presentation of colors at 7:30 a.m. in Green Park. The Ladies’ Tea will be held in the park as well, and the Battle of McLeod’s Mill reenactment will be held at the Chickasawhay River boat ramp beginning at 2 p.m. There will be a round of cannon fire at 6 p.m., and the evening will conclude with the period ball at 7 p.m., which everyone is invited to attend. The group will conclude the weekend Sunday with a period church service at 10 a.m. and an encore presentation of the Battle of McLeod’s Mill at 1 p.m. at the boat ramp.

In case of rain, the meal for actors will be held under the porch of the Justice Court building.

The Battle of McLeod’s Mill occurred on Dec. 10, 1864, and was part of the much larger Pascagoula Expedition or “Davidson’s Raid”, which traversed much of South Mississippi in late 1864. The goal of the Union campaign was to destroy and sever the Mobile and Ohio Railroad, weaken the defenses of Mobile, and divert Confederate resources away from General John Bell Hood’s army outside Nashville. 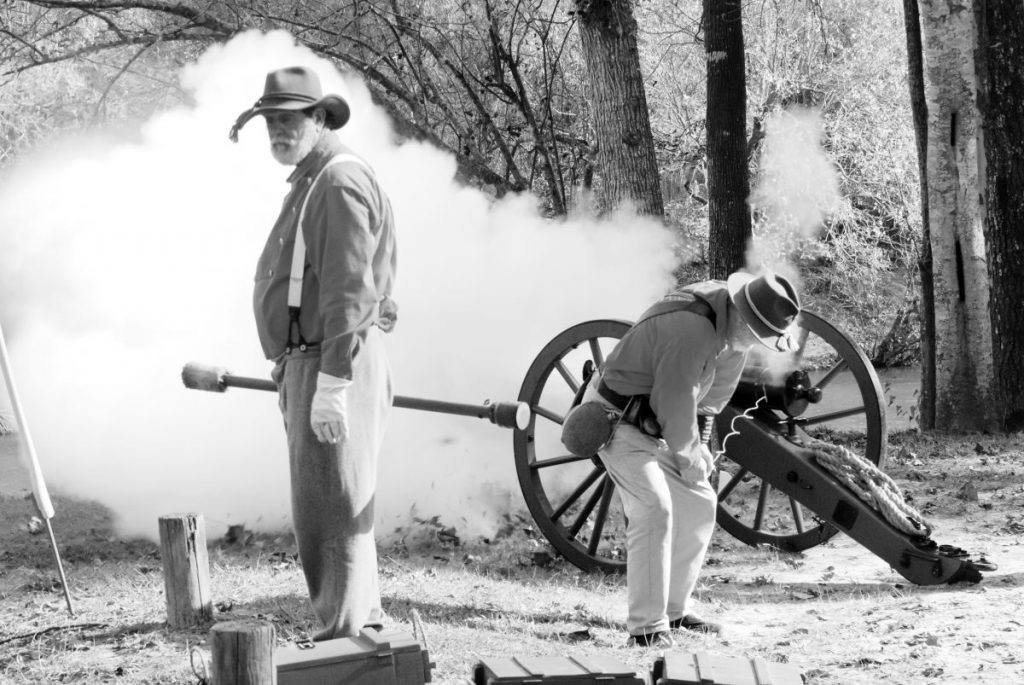 Artillery fire is always a big part of the annual reenactment of the Battle of McLeod’s Mill. Shown here are reenactors at a past event firing a shot across the Chickasawhay River. FIle Photo

Davidson’s Raid was part of ongoing Department of the Gulf operations designed to aid and complement Sherman’s March to the Sea and General George Thomas’ defense of Nashville. Virginian-born Brigadier General John Wynn Davidson was tasked by Major General E.R.S. Canby to raid deep into Mississippi to cut the M&O Railroad, threaten Mobile, and divert Confederate resources from Nashville. Although unsuccessful in severing the rail line, General Canby reported Davidson’s movements were causing a panic in Confederate held Mobile and were devastating the country generally, while demonstrating the Union could operate deep in Confederate territory sapping Confederate resources and morale.

The raid was very much a brother against brother affair, given the number of Unionist Southern Regiments involved. L.T. Albert Westinghouse, the elder brother of industrialist and inventor George Westinghouse, was killed while leading a cavalry charge at McLeod’s Mill.