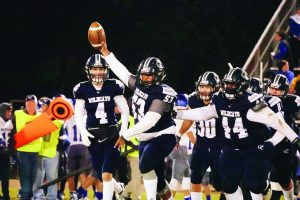 Senior Joe Dearman is shown (with ball) celebrating his first career interception during the Wildcats’ 33-20 win over Vancleave. The interception, a defensive lineman’s dream, is one of several big plays made by the Wildcat defense during the win.
Photo by Shelley Mitchell – Herald Contributor

Despite giving up five uncharacteristic turnovers, the Greene County Wildcats rolled to a 33-20 win over Vancleave on Friday to advance to the second round of the MHSAA 4A State Playoffs.

The win was the Wildcats’ eighth in a row and sets up a trip to Monticello this Friday to take on the Cougars of Lawrence County. Greene County coach Mike King said while he was disappointed with the turnovers, he was happy with his team’s effort and even happier for the win.

“We got off to a great start, but I am not thrilled about the way we finished,” King said. “I told our guys that we can’t turn the ball over like that and expect to win moving forward.”

“Despite the turnovers, we moved the ball very well offensively. And, our defense was consistent as usual. All in all, it is a win and those are never easy to come by this time of year. We’re excited to be moving on to the next round .”

Lawrence County enters this week’s matchup with a 7-5 overall record after a lopsided road win over Mendenhall this past week. They were the No. 3 team out of Region 6-4A after finishing with a 3-2 region record.

The Cougars began the year with a 19-18 win over Hazlehurst and followed that with 42-18 win over Brookhaven. Three straight losses followed to Pearl River Central (21-42), Jefferson Davis County (6-40) and Columbia (13-20).

They rebounded with a 57-30 win over Wesson and opened region play with a 58-6 thumping of Raymond the first Friday of October. They dropped a 38-7 decision to the region champs from South Pike, but escaped North Pike in a 42-41 nailbiter and beat McComb by a 20-13 margin the next week to secure a playoff berth. They wrapped up the regular season with a 22-6 loss at home to Lanier, but beat up on Mendenhall, the No. 2 team out of Region 5, by a 55-19 margin.

“They have a solid football team,” King said. “They are a run-dominant team, but do it very well, averaging over 300 yards per game on the ground.”

“They’re athletic at the skilled positions, so we want to make sure we control the line of scrimmage on both sides of the ball.”

The Cougars have nearly 500 rushing attempts on the season, compared to just 34 passes. With one running back approaching 2,000 yards for the year and a second just a few carries away from a 1,000-yard season, it’s no wonder they like to keep it on the ground.

Pittman has 63 fewer carries (141) than Cooper, but is averaging nearly seven yards per attempt and has 919 yards and seven TDs to his credit. Pittman has five 100-plus games under his belt this year, including at Mendenhall where he put up 123 yards and a TD on 13 carries.

Defensively, King says the Cougars will give opponents a lot of different looks, changing personnel and defensive formations regularly. Leading the way on that side of the ball for Lawrence County are senior linebackers Kendrick Madison and Jerid Dunaway. Madison (#12, 5-11, 215) leads the team with 96 tackles on the season, while Dunaway (#13, 5-11, 200) has 93 to his credit. Defensive ends Treizjan McLain (#25, Jr., 6-0, 250) and Stefan Pierce (#26, Sr., 6-2, 200) are impact players along the line of scrimmage and have 80 tackles each on the year.

The Cougars have forced 28 turnovers this season with McLain leading the way with four fumble recoveries. Senior linebacker Jamarcus Garner (#9, 5-10, 180) leads the team with three of the Cougars’ 10 interceptions under his belt.

GCHS is planning to stream the game live via the NFHS Network for fans wishing to watch the action online. 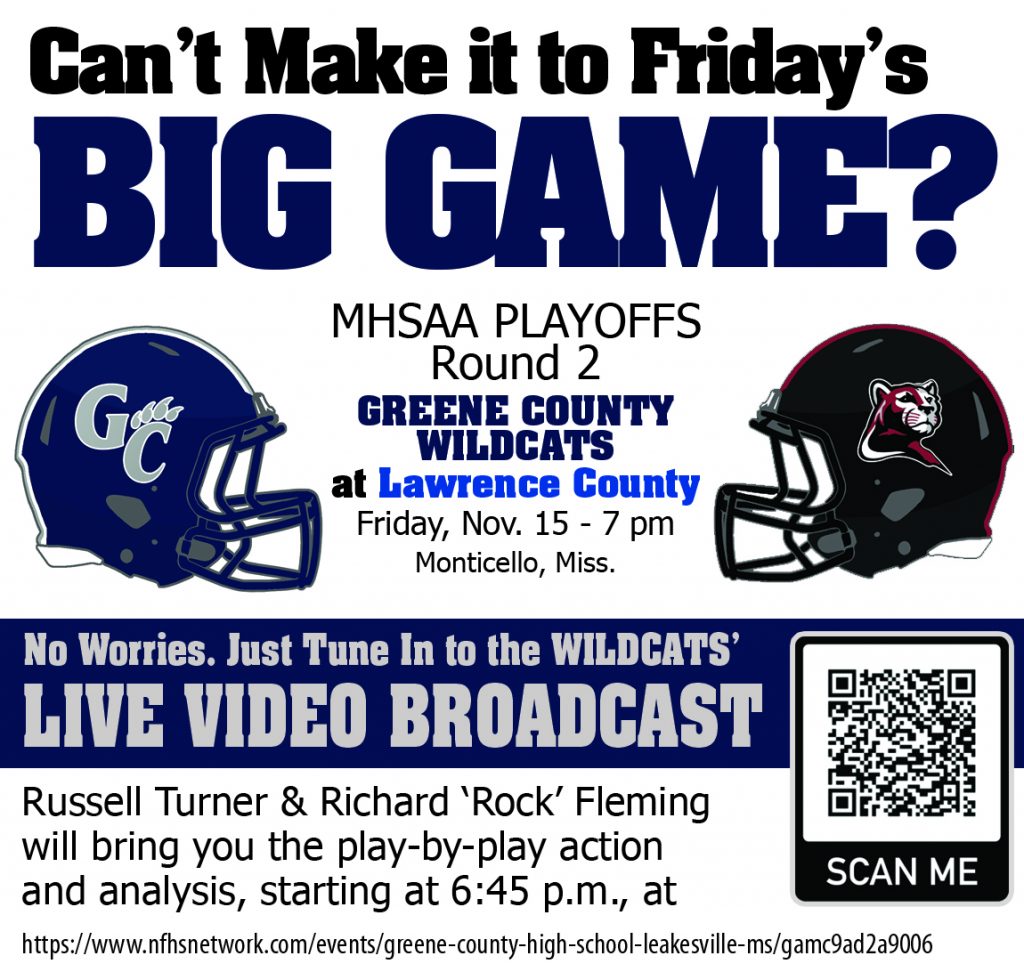 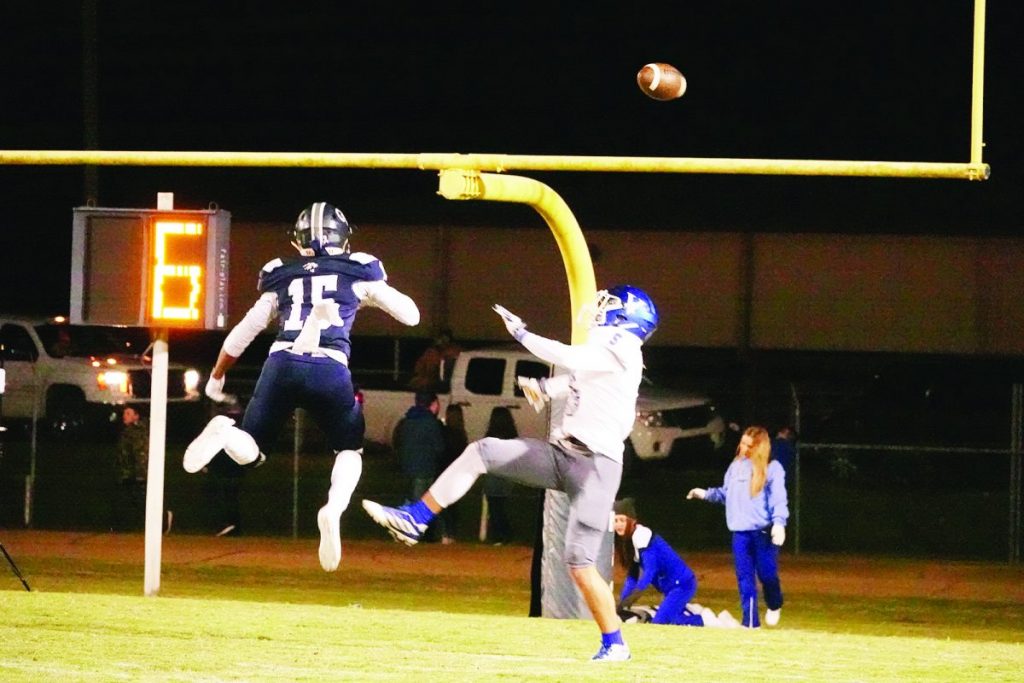 GCHS junior defensive back Dre’ Grice (15) is shown tipping away what would have surely been a Vancleave touchdown during the Wildcats’ 33-20 win over the Bulldogs last Friday at Wildcat Stadium. Grice will have a different task ahead of him this week as the Wildcats take on Lawrence County and the Cougars’ high-powered running attack.
Photo by Shelley Mitchell – Herald Contributor

Cats roll past Bulldogs despite mistakes

The Wildcats rolled up 449 yards of total offense against Vancleave to claim their Round 1 win over the Bulldogs. GCHS got off to fast starts in the first and third quarters and led 27-0 late in the quarter when coaches began substituting reserves in the place of starters. However, the five turnovers and a few costly penalties kept the Cats from blowing open the game.

Vancleave received the opening kickoff and had excellent field position after a nice return. However, a trick play on the Bulldogs’ first play from scrimmage resulted in an interception by senior Wildcat Garry Hawthorne, Jr. With 7:30 remaining on the first quarter clock, the Cats cashed in on the turnover as senior quarterback Drake Henderson capped an 11-play, 69-yard drive with a 1-yard TD plunge.

The GCHS defense did its part, forcing three punts by Vancleave, but a fumble and a tipped-pass interception kept the Cats from capitalizing. Greene County was able to extend its lead to 14-0 by halftime thanks to a 41-yard TD run by Henderson with 3:20 left in the second quarter.

GCHS received the second half kickoff and started the third quarter in great field position thanks to a nice return by Hawthorne. Three plays into the half, freshman K.J. Miller scored the first of his three touchdowns on a 28-yard run. The PAT failed but GCHS led 20-0 with 11:14 left in the third quarter.

The Cats pushed the lead to 27-0 with 3:57 left in the third quarter on a 1-yard run by Miller. The 11-play, 89-yard drive was the longest of the night for GCHS and included a big run by Henderson to the Vancleave 3-yard-line.

The defense continued to shine, but the Cats lost fumbles on each of their next three possessions. The second led to a 32-yard TD pass from junior quarterback Christian Kell to senior J-wes Small that closed the gap to 27-7 with just over nine minutes left to play.

A failed onside kick attempt by the Bulldogs set GCHS up with great field position at the Vancleave 34-yard-line. A nice, 20-yard run by Henderson set up Miller’s final TD, a 7-yarder that pushed the GCHS lead to 33-7.

The Bulldogs answered with their best drive of the game and closed the gap to 33-14 on a quarterback sneak by Kell with 3:34 left to play. They drew to within two scores when the Wildcats’ final fumble bounced right into the arms of senior Collin Wren, who sprinted 71-yards for the touchdown.

“Our first drives out of the locker room in both halves were really good and kind of set the tone for the game,” King said. “We’ve got to do a better job of protecting the ball, but overall, we are pleased with the win.”

The Wildcats rushed for 307 yards on the night with Henderson’s 122 yards and two touchdown’s leading the way. Henderson also threw for 142 yards on 10-of-11 passing.

Peyton Roberts had three catches for 25 yards, while Cameron Dunnam, Jacob Mitchell and Jashon McGee each added a pass reception.

Mitchell was 3-of-5 on extra point tries, with one PAT being blocked by the Bulldogs.