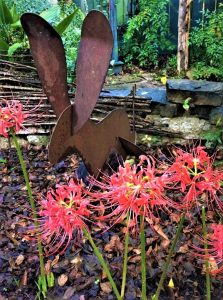 Naked ladies or spider lillies as they are often called are a common, but misunderstood plant in Mississippi.

I have more naked ladies dancing through my garden than I know what to do with. 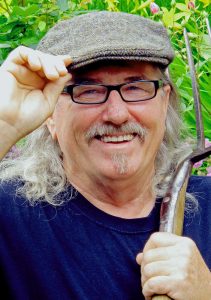 Of course I’m referring to the blood red flowers that’ve been popping up on knee-high leafless stems since Autumn’s first good rain. I know most of you call them “spider” lilies because the curved-back petals and long protruding stamen look kinda like daddy long-leg spiders. You might also think of “naked ladies” as their close cousin with large pink trumpets that appear leafless in mid-summer.

Not that it matters. Descriptive folk names are all good; because these leafless flowers appear seemingly out of the clear blue, they’re sometimes called resurrection, surprise, or magic lilies; in Colonial Williamsburg they’re referred to as British soldiers, though they weren’t introduced to America until the mid-1800s. Coastal and Florida gardeners have long called them hurricane lilies.

If you want to get very specific, go with the Latin name of these Amaryllis kin; red spider lilies are Lycoris radiata; yellow or golden ones are Lycoris aurea, and the big pink summer one is Lycoris squamigera. I grow those and a couple others. By the way, they’re uniquely Southern plants – they survive only in mild winter climate zones.

Enough of this. The nitty gritty of growing and sharing them is fascinating on its own.

The daffodil-like deer, squirrel, and vole proof bulbs sprout pale-striped monkey grass type leaves in the fall which die down in the spring after forming the following summer and fall flower buds, and they flower in the fall, each stem garlanded with seven to nine spidery flowers. The leaves require sunshine all winter to form flower buds, but they can get plenty even in shade if they are under deciduous trees that drop leaves in the fall.

They are easy to dig and divide right now, while you know where they are, but before I get to that let me dispel a horticultural myth. The reason they shoot up all over the place, including in abandoned fields and even along the Interstate highways, is because their Autumn seed pods get scattered by wind and mowers. Seedlings can take two or three years or more to reach flowering maturity, but over the decades they have become naturalized all over the South.

So why do many online experts say they don’t make seed? Simple: The first three bulbs brought to America in 1854 were actually sterile Japanese hybrids which multiply only by bulb division; the wild-collected species imported since then from their native China are actually quite fertile. My old friend Brent Heath, a prolific third-generation bulb from Virginia regarded as the South’s top bulb expert, told me he has them coming up by the thousands in his century-old garden, in places they were never planted. He said they’re pollinated by Sulphur and other butterflies, and later the seeds scatter everywhere. Who you gonna believe?

Brent also explained why newly-planted spider lilies take a couple of years to flower. “Their roots start to grow when they are flowering, and if the roots dry out they will struggle the first winter and skip a year flowering. Better to replant them very quickly, keeping their roots moist, or wait til spring when the leaves start to die down and have already formed the next fall’s flower buds.”

Mine are in full bloom, in a summer-shaded spot that gets winter sunshine aplenty; garden art reminds me not to stomp around or plant other stuff there. And call me a bad man, but I’ve found them to be perfect guerrilla gardening plants; every year I surreptitiously spread bulbs around town. Surprise!