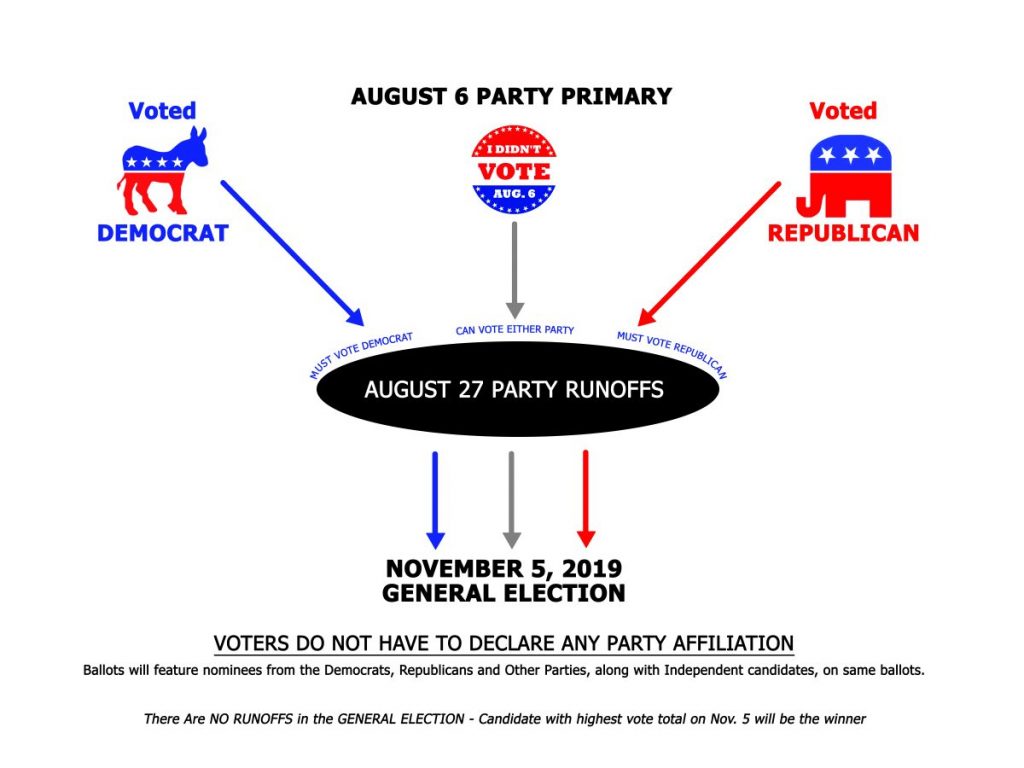 If you are a registered Mississippi voter who voted in the Republican Primary two weeks ago, or who didn’t vote in either primary on Aug. 6, your presence would be appreciated at your polling place next Tuesday.

That is the day four races of interest in Greene County, including one county supervisor’s race will be decided. The primary runoff election will determine which Republicans make the final ballot for November General Election. There will not be a runoff on the Democratic ticket as all of the state and local races on the Democratic ticket were settled on Aug. 6.

Voters in District 3 will have the biggest ballot on Tuesday as the Republican nomination for that supervisor’s race is still up for grabs. Incumbent Jerry C. Mills and Piave businessman Wayburn D. ‘Danny’ Smith Jr. are facing off in that race. Smith held a 353-to-275 vote led over Mills, but did not earn enough votes to claim a majority in the primary, which included a third candidate, Scott Maxie.
Mills or Smith will face off against Democrat Efird Eubanks in November.

The Republican races for Governor, Attorney General and the Dist. 105 House of Representatives are also set for the runoff next week.
Incumbent State Representative Roun S. McNeal, of Leakesville, and Perry County educator Dale Goodin are in a runoff for the District 105 seat in the Mississippi House of Representatives. Goodin claimed 41 percent of the total votes in the district earlier this month, while McNeal took 51.3 percent of the votes in Greene County and approximately 38 percent across the district.
Most county voters on Tuesday will help decide the Dist. 105 race. The exceptions are voters living in the State Line area who are included in House Dist. 86.

The winner of the McNeal-Goodin runoff will face Democrat Matthew Daves in November. Daves was unopposed in his primary.
Current Lt. Governor Tate Reeves received 49 percent of the statewide Republican vote in the first primary, but former Mississippi Supreme Court Justice Bill Waller forced the runoff by claiming 33 percent of the vote. Desoto County businessman and state representative Robert Foster received 18 percent of that vote and has since endorsed Waller in the runoff.

Current State Treasurer Lynn Fitch and attorney and longtime Republican political figure Andy Taggart are in a runoff in the race for Attorney General. Fitch received 44 percent of the vote Aug. 6, while Taggart received 29 percent to force a runoff. State Representative Mark Baker got 27 percent of the Republican vote statewide to finish third.

Fitch is an attorney who is in her second term as state treasurer. Taggart served as Republican Gov. Kirk Fordice’s chief of staff in the 1990s and a Madison County supervisor from 2004 to 2008.

Mississippi law does not allow “cross-over” voting, so only the voters who voted in the Republican Primary or who did not vote in either the Democratic or Republican Primary will be eligible to vote on Tuesday. Cross-over voting has long been prohibited by Mississippi law, and in reaction to the fallout of the 2014 Senate primary run-off, the 2016 Legislature passed legislation making cross-over voting a misdemeanor punishable by up to six months in jail and up to a $500 fine.

For more information regarding absentee voting or the voting process in general, contact any county election commissioner or call the Circuit Clerk at (601)394-2379.

Polling places will be open from 7 a.m. until 7 p.m. on Tuesday.