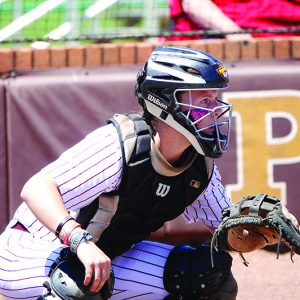 Mary Grace Turner is shown getting ready to receive a pitch during a game this past season. The Greene County native earned All-State and All-Region 23 honors on the field for PRCC this past season and also earned a spot on the school’s President’s List with a 4.0 GPA.

Greene County softball player Mary Grace Turner’s season ended a couple of weeks ago, but the former GCHS and PRCC Wildcat continues to pick up accolades for her work on and off the field this past school year.

On Monday, Pearl River Community College named the Leakesville resident as its female Wildcat of the Month, marking the second consecutive month Turner has earned the honor.

A William Carey signee, Turner tore the cover off the ball in May, hitting .458 with a .536 on-base percentage and 1.250 slugging percentage. Turner, who was instrumental in PRCC hosting its first Region XXIII Tournament in program history, finished the month with four doubles, five home runs, 12 RBIs and 10 runs scored.

Turner and Fagan were also First-Team All-Region selections for NJCAA Region 23, according to Region Director Brent Harris. On the season, Turner was one of the nation’s top power hitters, slugging a program record 18 homers (fifth in the nation). Turner added 48 RBIs and 16 doubles with a .397 average, .503 OBP and .975 slugging percentage. She also crossed home plate 46 times.

On Tuesday, PRCC also announced Turner as a member of the school’s President’s List for her efforts in the classroom. The PRCC President’s List recognizes full-time students with at least 15 hours who achieved a 4.00 grade point average during the previous semester.