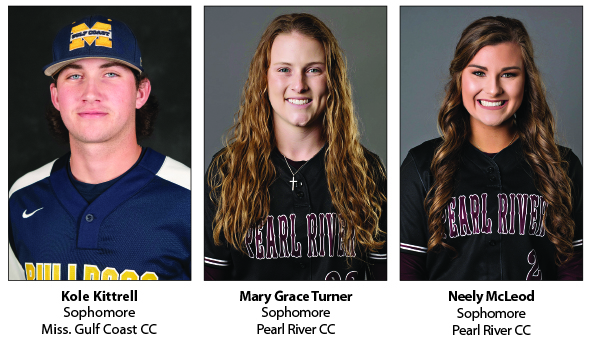 Juco baseball and softball postseason play got underway around Mississippi on Wednesday and three Greene County student athletes came up big for their respective teams.

Mississippi Gulf Coast Community College sophomore Kole Kittrell recorded the final two outs in a tight game with Meridian to secure a 10-8 win for the Bulldogs in game one of the best-of-three first-round series at Meridian. It was the 2017 Greene County graduate’s fifth save of the year.

MGCCC (27-16) was the only road team to win in the four qualifying series being played across the state. A win Thursday would move the Bulldogs into next week’s regional at Itawamba.

In Ellisville, Mary Grace Turner and Neely McLeod each had big days for Pearl River Community College as the Lady Wildcats earned a huge 8-2 win over nationally-ranked (No. 3) Jones College in the opening round of the MACJC State Softball Tournament being hosted by the defending national champions.

Top-seeded Jones took a 2-0 lead in the second inning, but Turner’s line-drive missile over the center field wall in the top of fourth inning started the scoring for PRCC and changed the complexion of the game. She added a 2-run double in the top of the seventh as the Lady Cats put up five runs to take control of the contest. Turner finished with three RBIs and two runs scored for PRCC.

“I knew it was a hard hit,” Turner said of her 18th homer of the season. “I decided after she struck me out before that she was not getting me again with an offspeed pitch. It’s fun to hit, it really is. All week coach has been putting it in our heads that as long as we play to the best of our abilities nobody can beat us.”

PRCC has won 12 of its last 14 games. During that time Turner and McLeod have both been hot at the plate. McLeod didn’t have a hit on Wednesday, but came up with one of the biggest plays of the day with a diving catch in foul territory to end a Jones threat in a 3-2 game in the bottom of the fifth inning.

PRCC is set to take on Northeast CC in round two of the tournament at 5:30 p.m. Thursday.