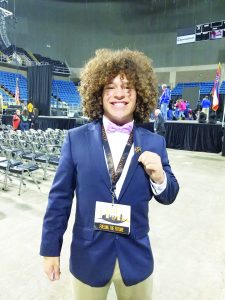 GCHS junior LaDon Woullard was elected as the State Beta President during the state convention earlier this week in Biloxi.

They didn’t claim the coveted group talent award this year, but the Greene County High School Beta students once again shined at the annual senior Beta Convention that ended Tuesday.

Details were hard to come by at press time as the students, parents and advisors were in route back to Greene County after a few hectic days in Biloxi, where the event was held. However, what was known was that GCHS students took some of the event’s top prizes and held their own in every category in which they competed. They also got one of their own elected as the new Mississippi Beta President.

“I am just so very proud of all of these students,” GCHS Beta sponsor Carla Churchwell said. “They all worked hard and did a great job. I could not have asked for any better.”

Leading the highlights from the event was the election of GCHS junior LaDon Woullard as Beta President. Churchwell said Woullard did a great job campaigning and got tremendous support from his school mates, including his campaign skit team, which won first place in that competition as well.

Woullard’s classmate Olivia Eubanks was also a big winner, claiming the top award in the speech competion for the second consecutive year. Eubanks, who won the Division One competiton for freshmen and sophomores a year ago, claimed the Division Two competition (juniors and seniors) this year with her speech titled “Step Up to the Plate”, which encourages her audience to get involved in foster care in Mississippi, a topic she is passionate about as a member of a foster family herself.

Churchwell and others said the group talent team’s performance was a real show-stopper. However, judges of the event had tough decisions to make due to the level of talent at the event and GCHS ended up having to settle for fourth place.

Three GCHS students also earned the right to perform in the opening act at National Beta Convention in Oklahoma City this summer. Earning their ‘Golden Tickets’ after their performance at the event were Taylor Garretson, Jaycie Tungett and Lillyan Holland.

The Herald plans to run the full listing of awards and honors in an upcoming edition.