Boys back in the hunt with big win over Purvis

The Greene County Lady Wildcats have solidified their position near the top of the Region 7-4A standings with three straight wins since a setback to Lawrence County on Jan. 4. Meanwhile, the Wildcats are sitting at 3-2 in region play, one half game behind Lawrence County for second place in the region standings. 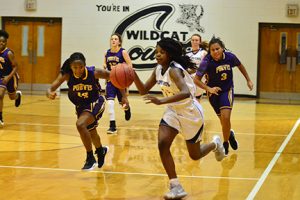 Sophomore Serenity Blakely, shown here pushing the ball up court against Purvis, has been a spark for the Lady Cats as they have one 3 straight region games.

The Lady Cats got on the roll with with a 63-28 whipping of Forrest County AHS on Jan. 8. Sophomore Kat Garrett led the team with 12 points, while senior Nyke Bolton followed with 11. Junior Bre Brown had 10 points and nine rebounds in a solid performance.

GCHS followed that up with a 50-40 win over Sumrall last Friday. Sophomore Serenety Blakely had a big night, posting a double-double with 11 points and 11 rebounds. Senior Sha Winborn had 10 points, five rebounds and five assists, while junior Destiny Eubanks added 11 points and five rebounds for the Lady Cats.

On the boys’ side, the Wildcats put themselves back in the race for a high playoff seed with a convincing win over Purvis on Tuesday. Seniors Darrell Johnson and Jared Nicholson continued their hot play for GCHS as each went for a double-double against the Tornadoes. Johnson had 15 points and 13 rebounds in the win, while Nicholson posted 16 and 12, respectively. Brothers Josh and Jacob Thornton also were big in the win as Jacob, a junior, had five rebounds and Josh, a senior on the squad, led the team with three steals.

The Wildcats dropped a 77-74 nail-biter at FCAHS on Jan. 8.  Despite Johnson and Nicholson had huge games for the Cats against the Aggies. Johnson put up 28 points and six rebounds, while Nicholson had 27 and eight, respectively. Senior Josh Thurman had a solid game as well with 11 points in the hard-fought loss.

Johnson and Nicholson each posted double-doubles as GCHS responded with a 54-33 win over Sumrall on Jan. 11. Nicholson had 17 points, while Johnson added 16. Each finished with 11 rebounds. Junior Anthony Calhoun had eight points and junior Jacob Thurman posted seven for GCHS. 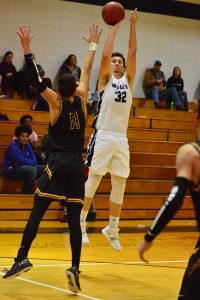 Senior Jared Nicholson is shown putting up two of his 16 points in the Cats win over Purvis on Tuesday.

Friday’s action against Lawrence County will kick off at 5 p.m. with the Jr. Varsity girls taking on the Lady Cougars.