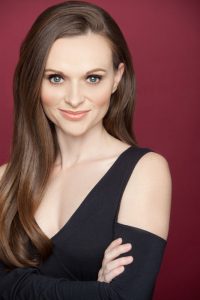 The idiom “Break a Leg” has been used by actors and performers for a long time. According to Phrase Finder, actors are known to be superstitious (or at least they act like they are). The phrase derived from “the belief that one ought not utter the words ‘good luck’ to an actor.” So, in wishing the actor to break a leg, you are actually sending her good wishes.

Shee’ Dueitt graduated from GCHS in 2004. She excelled there and received numerous awards and accolades. She was head cheerleader, captain of the speech and debate team, and won several acting awards. Shee’s talent was noticed at the state level, too, as evidenced by her state championships.

Currently, Shee’ is pursuing her acting career in Hollywood. She recently signed with, along with her agent and manager in Los Angeles, an agent in Atlanta. She continues to audition for roles in Los Angeles and for roles in the Southeast. Shee’ lists former teacher Jennifer McNeal as a person who inspired her. “Mrs. Jennifer pushed me to follow my dreams. Sometimes, when I need a pick-me-up, I think of things that she taught me. At other times, I simply call her. She’s the best!”

McNeal beams with pride when discussing the energetic and talented former student. “Shee’ is a gifted performer. She can sing, dance, and act. One of the reasons that she is successful as an actor is because she can put herself in the position of others. She’s truly one of the most caring people I’ve met.”

I asked Shee’ what advice she would give to a student at Greene County High School who also dreams of becoming an actor. She said, “If you want it, go for it! Don’t let anyone or anything stop you. If you can’t go a day without thinking about it, that’s what you’re supposed to be doing.” I also asked her the best advice that she had received along her journey. She said, “Stop comparing yourself to other people. Don’t worry about what other people are doing, where you think you’re supposed to be in life at a certain point, or what others think you should be doing. Live your best life. Do what makes you happy!”

When Shee’ misses home she picks up the phone and Facetimes family and friends. I asked her what she missed most about home. “The people,” she said. “Just good, God-fearing, honest people.”

Her parents, Mace and Gloria Dueitt, taught her never to forget where she came from and to work hard and be good to people. No doubt, Shee’ has followed the sage advice of her parents.

I’ve always believed that it doesn’t matter whether the road that leads from your home is paved, graveled, or dirt, it can take you anywhere in the world. The road that ran in front of Shee’ Dueitt’s

From all of us in Greene County, Shee’, break a leg! We are mighty proud of you!