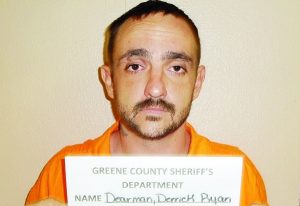 MOBILE — Attorneys for a Greene County man accused of a mass killing near Citronelle, Ala. in 2016 will reportedly plead guilty to the murders.

Reporter Mark R. Kent of the Call-News newspaper, which covers Citronelle and Mobile County, is reporting that attorneys representing Derrick Dearman filed notice Tuesday morning in Mobile County Circuit Court that he will plead guilty to 10 counts of capital murder for the slaying of five people in a house west of Citronelle on Aug. 21, 2016.

Kent reports that court records show Dearman, 30, of Leakesville, will plead guilty to killing Robert Lee Brown, 26; Chelsea Marie Reed, 22; Justin Kaleb Reed, 23; Joseph Adam Turner, 27; and Shannon Melissa Randall, 36. His pleas are expected to include an admission of guilt on one count for each defendant for murder in the course of a first-degree burglary and one count for each victim for murder in a crime in which more than one person died in the same act. Each of the victims were killed at a home at 17160 Jim Platt Road outside Citronelle.

Despite the guilty pleas, a trial will begin Sept. 10 in the courtroom of Mobile County Circuit Judge Rick Stout with about a week of jury selection to take place before opening arguments and testimony begin. This is a normal procedure for a death-penalty case, according to state law, since testimony in the case will weigh on whether Dearman is sentenced to death or is given life in prison without parole. Those penalties are the only ones a jury can choose when a capital murder suspect pleads guilty in advance of a trial.

In an order rendered by Stout on Aug. 8, the judge ruled the jury selected to hear this case will be sequestered for the length of trial.

As part of the plea agreement, the Mobile County District Attorney’s Office has reportedly agreed to not pursue a conviction on four other counts against Dearman. Two of the counts are related to the death of an unborn child that Chelsea Reed was pregnant with at the time of her killing, and the other counts were for first-degree kidnapping in relation to taking his girlfriend and her infant, and holding them for several hours afterward.

The Mobile County District Attorney’s Office is seeking the death penalty for Dearman.

Dearman is accused of using an axe and a handgun to kill the victims as they slept.