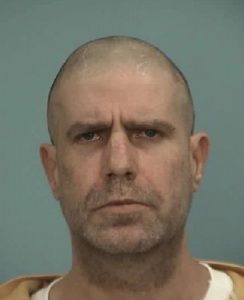 OCEAN SPRINGS, Miss. (AP) — An inmate has been captured in Mississippi, two days after escaping from a state prison.
The Mississippi Department of Corrections says 47-year-old Michael F. Wilson , known as “Pretty Boy Floyd,” was captured Saturday evening in the coastal city of Ocean Springs.
He was discovered missing Thursday afternoon from South Mississippi Correctional Institution in Leakesville, which is about 70 miles (113 kilometers) northeast of Ocean Springs.
Wilson was sentenced to two life sentences in September 2015 for killing two people in coastal Harrison County a year earlier.
The Mississippi Department of Corrections says Wilson was taken back into custody without incident. Officers from several law enforcement agencies were involved with the search for him.
The prison in Leakesville was put on lockdown Thursday and remained that way after Wilson was caught.

Law enforcement officials in Greene and George counties are actively searching for a state inmate who escaped Thursday afternoon from the South Mississippi Correctional Institution in Leakesville.

Michael Floy Wilson, MDOC #29893, was discovered missing at approximately 12:48 p.m. The institution has been placed on lockdown.

Wilson, 47, who is serving a life sentence from Harrison County for multiple convictions, including murder, was last reported being seen in Lucedale at Walmart. He was able to get a ride from a Pine Level resident into Leakesville to the Greene County Hospital, where he had said he was going to meet his wife at the emergency room. After leaving the hospital her reportedly convinced an elderly resident who lives nearby to give him a ride to Lucedale.

Wilson stands at 5 feet 11 inches tall and weighs 160 pounds and has hazel color eyes. Wilson was last seen wearing camouflage clothing and looks different than his mug shot: his hair is longer and curly. Officials do not have reason to believe Wilson is armed, but he should be considered dangerous.