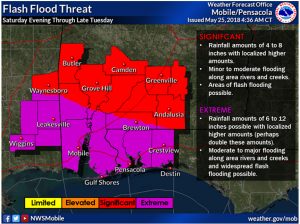 Greene County Emergency Management Director Trent Robertson is warning local resident to prepare for torrential rains and the possibility of severe weather this weekend as forecasters say a tropical weather system moving toward the Gulf of Mexico is strengthening.

The National Hurricane Center said Friday that a low pressure system in the northwestern Caribbean Sea became better defined overnight Thursday and could be a tropical depression or storm by Saturday.  The center put chances of formation at 90 percent over the next two days.

“We are looking at significant rainfall and the potential for severe weather in our area this weekend,” Robertson said Friday morning after checking in with weather service officials. “Projections are for 8-to-12 inches of rain, with even more, possibly up to 15 in isolated areas, over the weekend and into late Monday, early Tuesday.”

“The storm has increased in severity and there will certainly be the potential for strong wind gusts and the threat of tornadic activity. If tornados are spurred from this system, they will not be long track storms, but more likely brief, short spin-ups. That is not to downplay the threat by any means, because these can still be very dangerous and damaging.”

Robertson said residents should prepare now and be ready for a weekend full of threatening weather and potential flooding of roads and low-lying areas. He said those preparations should include keeping a close eye on weather forecasts and updates.

As of Friday morning, the first weather system of the season was positioned east of the Yucatan Peninsula and is moving northward. Forecasters say heavy rains are likely across western Cuba, much of Florida and the northern Gulf Coast into early next week.

The tropical threat comes earlier than usual. The six-month hurricane season doesn’t begin until June 1. If it becomes a tropical storm, it would be named Alberto.

Much of the area expected to be impacted by the storm, including Greene County, has already seen heavy rain this week, meaning the deluges that could accompany a tropical storm may leave those communities vulnerable to flash flooding and river flooding.