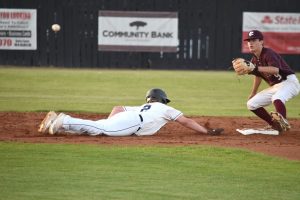 Sophomore Dylan Miller slides safely back into second base during a region matchup with FCAHS last week. Miller is one of several underclassmen making key contributions to the Wildcats’ success this season.