Supervisors hoping move will save time and road district resources

Herald Correspondent
The Greene County Board of Supervisors is getting dam serious about beaver control in the county.
Supervisors recently entered into a 1-year service agreement with a USDA Wildlife Services Program in hopes of alleviating, or at least controlling, damage to roadways caused by flooded beaver ponds.
While the BOS and private landowners often work together to combat the issues, beavers are costing county leaders time and resources they would like to direct elsewhere. And, unfortunately, efforts to control the problem have not produced very good results.
When beaver dams force flooding of or near roadways, county crews and equipment are pulled from other projects to unclog culverts, break dams and often-times repair flood-damaged roads. This process is often just a temporary fix that slows completion of other projects all the while costing the county money.
The supervisors’ agreement with the USDA Wildlife Service covers trapping of beavers, as well as dam and debris removal. This service is intended to reduce the number of dams near roadways and to help control the overall beaver population in the county.
Supervisors Jerry Mills (Dist. 3) and Harold Cook (Dist. 5) took time recently to discuss the nuisance caused by beavers with the Herald. Both districts have several areas along county roads that are routinely impacted by beaver activity. County workers check the spots regularly to remove any debris that could back-up waterflow and cause flooding. Both men are hopeful the agreement with the USDA will produce better results for protecting the roads and adjacent private property.
“We have to ensure maintenance and road safety,” Cook said. “These beavers and their dams can cause land erosion, too.”
“I’ve already seen the benefits of joining the program. You can’t get rid of all the beavers, but you can make the problems manageable.”
Dustin Fore, the USDA Wildlife Services Agent for this area, has been making rounds with supervisors and identifying problematic areas. Thus far, Mills and Cook said Fore is working hard in the county to get the beaver problem under control. 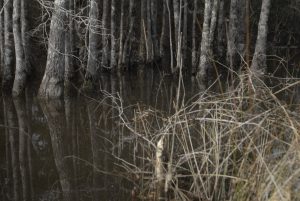 The United States Department of Agriculture claims that beavers cause an estimated $100 billion annually to public and private lands. Left uncontrolled, these creatures can destroy timberland by flooding the land and slowly drowning the trees. Structural damage can occur to homes and other buildings, and even agricultural crops can be destroyed by the work of beavers.
Bearld Harvison, a resident in Cook’s district, has suffered damage many times over because of the gnawing rodent. He said he sees firsthand the damage beavers can do to roads and property.
“I have got to clean this culvert out every day or it’ll be stopped up,” Harvison said, standing alongside a spot on Carl Ball Road.
Harvison said he has been battling beavers for about ten years. Beaver water is situated on each side of the low-lying road near his home, and chewed off trees and mud and twigs placed in front of the culvert are visible from the road bank. Harvison regularly uses his personal tractor to remove the built-up debris from the culvert openings and has also used metal racks he said he recycled from an old freezer to block the beavers’ access to the culverts.
Recent rains flooded this section of road, but the culprit was not the amount of precipitation. An open culvert would have easily handled the amount of runoff from the rains, but the beavers’ handiwork prevented that.
In Mills’ district, Cochran Road is one of the more heavily impacted areas. Beaver are wreaking havoc by damming up a small creek that runs through the area and Mills said the road has flooded several times because of it. The first-term supervisor says he is hopeful the new contract with USDA will be the solution that will help save tax dollars and focus resources elsewhere.
“It takes a lot of man-hours and money to come out here to fix these roads once they have been flooded,” Mills said. “This program is supposed to help keep us from getting to that point.”
Fore said he was unable to comment to the Herald regarding his work in Greene County and directed questions to a regional USDA spokesperson. As of press time, a statement from the USDA had not been received by the Herald.