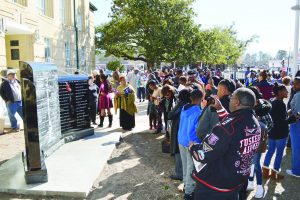 Herald Editor
“If you are waiting on someone else to tell your story, it will never be told.”
That’s the message guest speaker Rod Woullard of Forrest County told a group of well over 100 people gathered Monday for a luncheon honoring the contributions of area residents made during the civil rights movement. Woullard was congratulating those gathered in the Leakesville Community Center on the unveiling of a new Civil Rights monument on the front lawn of the Greene County Courthouse Monday morning.
Woullard, a longtime county supervisor in Forrest County, was at the unveiling at the invitation of Greene County Dist. Two Supervisor Morris Hill. The two were part of a group that packed the front lawn of the courthouse on Martin Luther King Jr. Day to unveil the 3-piece Civil Rights Monument. He said he was impressed and touched with the outpouring of support for the effort. Others were as well, including Leakesville resident Brenda Mosley, the chairperson for the Greene County Civil Rights Alliance, which worked to design and fund the monument project.
“This is a great day and we have a great crowd gathered,” Mosley said Monday morning.
The finished work is a 3-piece monument with Dr. Martin Luther King Jr. and the names of 20 local residents as the centerpiece. To the right and left of the center piece are the names of Mississippians and national figures who played key roles in the Civil Rights Movement.
Local residents honored are Mary C. Allen, George W. Anderson, Linwood Bolton Sr., Magnolia Cochran, Clarence Debose, Mack A. Hayes Sr., Johnnie Hill, Tom T. Johnson, Cozie Leverette, Wilma Leverette, Matylin Loper, Geraldine McCann, Tony McCann, Carrel Moody Sr., Charlie Moore, H.B. Peters, Ernest Rogers, Walter Shumac, Arthur Sowell and Nathaniel Taylor. A special program produced by the Alliance for the event includes a photo and bio for each. Copies of those programs are available through the Alliance.
Pauline Porter, an officer with the Civil Rights Alliance, and one of the first people to approach the county board of supervisors about the monument, said the monument idea grew out of concerns she and others had when the local Sons of Confederate Veterans erected a monument to Confederate soldiers in 2016. Porter said she felt the approval for the SCV monument demonstrated “insensitivity” toward the local African American community by county supervisors. 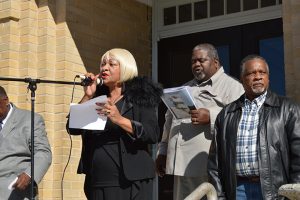 While the reaction to the SCV monument played a role in getting the civil rights monument project off the ground, supporters of the new monument say that quickly became a side note. Honoring the memories of the national, state and local people who contributed to the struggle for equal rights and telling their stories became the singular focus.
The Alliance reportedly raised over $15,000 for the monument, which was manufactured by Doric South Monuments of Moss Point. Donations are still being accepted for the project, which Alliance members say is ongoing, with future events, tributes planned.
Supervisor Hill served as the Master of Ceremonies for the unveiling ceremony. A bell tolled as Hill read aloud each of the names of the local residents memorialized on the center stone. Afterwards, many of those in attendance posed for photos with the monument and each other before relocating to the community center for the luncheon.
“It’s been a great day,” Hill said. “This is a proud day for me and I believe this new monument is something everyone in Greene County can take pride in.”
Hill said the irony of the new monument standing just a few feet from the one honoring local men who fought for the Confederacy was not lost on him. However, he doesn’t see the two monuments, erected approximately one year apart, as a divisive issue for Greene County.
Hill said the felt it was fitting the unveiling took place on Martin Luther King Jr. Day as it was King who famously said, “We must learn to live together as brothers or we will perish together as fools.”
“I don’t get upset about that and don’t think others should either,” Hill said. “The people that worked to erect the Civil War monument were trying to honor their ancestors. The group that saw the Civil Rights monument to fruition is doing the same thing.”
“We all share a common history, but also all have different stories to tell. To me, it is something for Greene County to be proud of. We may have differences of opinion, but we still live together and work together. Greene Countians need to continue to find ways to keep the conversation going and find common ground on issues that impact us all.” 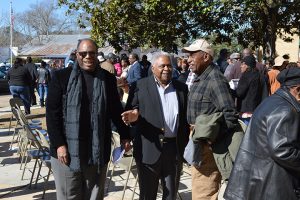 Old friends gather to talk and celebrate at the unveiling.