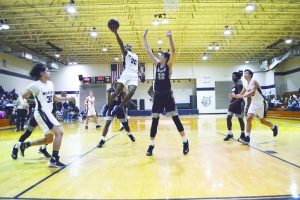 Photo by Russell Turner
Greene County junior guard Darrell Johnson is shown driving to the basket for a bucket in the Wildcats’ 67-52 win over Forrest County AHS last Friday. Johnson scored 14 points in the matchup, while GCHS senior Larue Weaver (shown left working for position) led all scorers with 29.

Wildcats and Lady Cats win region opener and are 9-3 at Christmas break
By RUSSELL TURNER
Herald Staff
The Greene County High School basketball teams will head into the Christmas holiday on a high note after back-to-back wins last week that included a win over Forrest County AHS to start region play.
Both teams are sitting at 9-3 on the year and 1-0 in Region 7-4A after wins over Richton and FCAHS last week. For the Lady Cats, the two wins followed their first back-to-back losses of the season as they dropped a 1-point decision on the road at East Central in the first game after falling to West Jones in the finals of the Richton Rotary Tournament.
The Lady Cats got back on the winning trek on Dec. 12 with an impressive road win at Richton. Eleven GCHS players scored in the matchup, which GCHS won by a lopsided 47-9 margin. Senior Beyounce Higgins led the way for GCHS with 13 points and also added five rebounds and three steals. Sophomore Kyla Brown was second in scoring with eight points for GCHS. Freshmen Hannah Hillman and Kat Garrett, junior Sha Sha Winborn, and senior Ranisha Gunn each had four points, while Gen Walley, Nykeria Bolton, Shaniyah McCann, Kelsie Mitchell and Tori Moulds added two apiece. While Gunn did not light up the scoreboard she was impressive elsewhere, finishing with team highs in steals (9) and assists (6). Sophomore Taylor McLeod led the team with nine rebounds.
In the region opener at home on Friday, GCHS jumped out to an early 10-point lead in the first quarter and came away with a 44-26 win over the Lady Aggies. Brown was force for GCHS, putting in 23 points and pulling down nine rebounds. Gunn was solid as well, putting up 11 points and finishing with four rebounds, two assists and two steals. Senior Tori Moulds scored just two points, but led her team with four assists and had eight big rebounds for GCHS.
In boys’ action, GCHS claimed their fourth and fifth straight wins of the year with wins over Richton and FCAHS. Seniors Derrick Grice and LaRue Weaver combined for 33 points to beat the Rebels 64-50. Grice led the team with 17 points, while Jacob Mitchell and Jared Nicholson followed with eight apiece. Darrell Johnson and Jacob Thurman added five each.
The Cats did not get off to a great start at home against the Aggies, but dominated down the stretch to grab a 67-52 victory. Weaver had the hot hand for GCHS, finishing with a season-high 29 points. Johnson added 14 for Greene County, while Nicholson had eight. Anthony Blakely and Grice had six each, while Mitchell rounded out the scoring with four.
Both teams will be back in action the day after Christmas with an appearance in the Vancleave Christmas Tournament. The Lady Cats will kick off the event with a matchup with Longbeach at 3 p.m. Tuesday. The Wildcats will play the host Bulldogs in the nightcap with tip off expected around 7:30 p.m. The tournament will continue through Dec. 29.