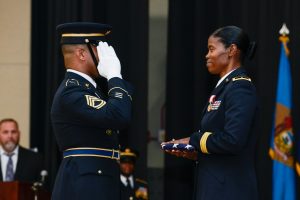 From Staff and Contributed Reports
McLain native Barbara Lynn Owens’ 32-year military career came to a close last Friday with a retirement ceremony in her honor at Fort Knox, Ky.
Brig. Gen. Owens graduated from McLain High School in 1981 and started her military service by joining the Army ROTC during her junior year at the University of Southern Mississippi. She retired as the Deputy Commanding General for the U.S. Army Human Resources Command on Sept. 22 with the added distinction of being one of two African American female general officers in the Army Reserve.
“She said they will pay you $100 a month, so I signed up the next day,” Owens said, remembering a conversation she had with a friend at USM who was encouraging her to become a member of the ROTC. “I joined for the money, but I didn’t stay for the money. I fell in love with it.”
Owens originally intended to serve only the amount of time required to fulfill her obligation. She changed her mind after discovering the satisfaction of working personnel actions and taking care of soldiers during her first assignment with the 85th Division in Chicago where she was the squadron personnel actions officer. She was the only soldier in the unit with human resources experience and was charged with providing support that affects the overall well-being and welfare of soldiers.
“When soldiers aren’t getting their awards and promotions on time, it decreases morale,” Owens said. “To be able to put systems in place and see those things happen and the immediate gratification that soldiers and families have (when you fix an issue is) what, I think, I was most passionate about.”
On top of her military accomplishments, Owens holds degrees from the University of Southern Mississippi (BA in journalism), Webster University (Master of Arts in Human Resources) and the U.S. Army War College (Master of Strategic Studies).
Previous assignments for Owens include: Personnel Management Officer for the 4013th U.S. Army Garrison Support Unit in Bossier City, La., and Chief of the Human Resources Division of the 90th Regional Readiness Command in North Little Rock, Ark. She held three positions with the U.S. Army Reserve Command Headquarters at Fort McPherson, Ga. and deployed to Kuwait with the U.S. Army Reserve Command personnel division out of Fort Belvoir, Ga.
Throughout her career, Owens strived to write policies that met Soldiers needs by seeking input and feedback from soldiers on those policies before implementing them.
“We’d bring in younger soldiers and get them to talk about a new policy we had come up with and ask ‘how is this going to work for you?’” Owens said.
As the DCG for HRC, she recently solicited soldier feedback on a new action tracking system.
“What we thought we were going to have in place ended up being totally revamped because it wasn’t really what the younger soldiers wanted and what would work best for them,” Owens said. In the end, we came up with a product that worked great for all of the Army Reserve. And it was because we were able to reach out to the lower ranking soldiers.”
Promoted to brigadier general three years ago, Owens said she never thought she would ever become a general officer and always just focused on doing well the job she had at the time. She credited her success to the passion she holds for her job, the support she received from teammates, family and friends and the strong work ethic instilled in her by her mother, Barbara J. Sumlin, who still resides in McLain.
“I am very proud of my daughter,” Sumlin told the Herald. “It was very nice to be able to go to the ceremony and see so many people speak so highly of her.”
“I knew she was going to be successful, but I never dreamed she would go on to be a general. Everybody around her sees how hard she works and she makes it a point to promote (the value of hard work), especially when she is speaking with young people.”
Owens still loves the Army and taking care of soldiers, but said after more than three decades, it’s time to retire and spend time with her husband and family. Still, she challenged those who attended her retirement ceremony to take up the mantel and coach, teach and mentor somebody in their lives.
She hasn’t given much thought to what kind of work she would like to do in retirement but said it will be something for which she is passionate.