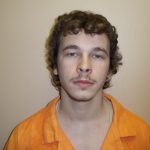 Accused killer Matthew Moberg has been extradited from Alabama and is being held without bail in the George-Greene Regional Correctional Facility in Lucedale.

Moberg, 22, of Wilmer, Ala., is facing a capital murder charge in connection with the death of Brian Parker, of Semmes, Ala. Moberg is accused of bringing Parker across the state line into Mississippi this past May, killing him and leaving his corpse on a logging road just a couple hundred feet off Miss. 63 near the highway’s intersection with Jake Hill / Winborn Chapel Road.

Moberg was arrested by Mobile County authorities on May 24 after he tried to flee from police who had gone to his workplace as part of their investigation into Parker’s disappearance. He has been held since that time in Mobile County, but was transported to Greene County Thursday afternoon. During an initial court appearance on Thursday Justice Court Judge Joe Beard ordered him held without bond until his trial date.

Parker’s body was discovered by authorities May 31 following an extensive search. Members of a search team consisting of sheriff’s office officials from Greene, George and Mobile counties and FBI agents. Officials had been looking for Parker since the young man was reported missing on May 24.

Parker was spotted alive on May 23 with Moberg on security video from the Dollar General Store on U.S. 98 in Rocky Creek. The deceased was last seen prior to that at a residence in Wilmer. The two men were reportedly ‘family friends’.

Moberg, who was on probation at the time of his arrest, had only recently been released from prison after a 2013 guilty plea for conspiracy to commit murder and conspiracy to commit kidnapping. In that case, officials say then 18-year-old Moberg and another man planned to kidnap Moberg’s ex-girlfriend and kill her new boyfriend.