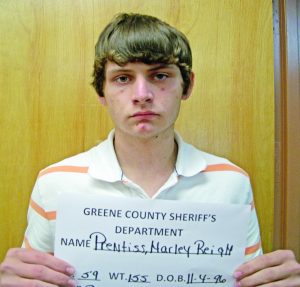 Harley Reigh Prentiss will serve 15 years in prison for the 2012 sexual battery of a defenseless teenage girl.

That was the ruling passed down Thursday by Judge Kathy King Jackson in Greene County Circuit Court. Judge Jackson sentenced Prentiss to the state-recommendation of 20 years, but ordered the 20-year-old to serve 15 years day-for-day with the Mississippi Department of Corrections with the final five on post-release supervision. He was also ordered to register as a sex offender for the remainder of his life and pay $1,500 in fines and court fees.

Prentiss waved his right to a jury trial on May 15 and pled guilty to sexually assaulting the 15-year-old in late 2012. In making his plea, Prentiss admitted having sex with the victim while she was “intoxicated and unable to consent”. The victim was assaulted Nov. 3, 2012 after a party she attended with other juveniles and several adults. On the morning after of the incident she, along with a male companion, was dropped off, injured and semi-conscious, in Leakesville’s Magnolia Cemetery.

Prior to sentencing, defense attorney Katie Dickerson asked the court to show mercy on her client, pointing out he was not quite 16 when the assault occurred.

“He has grown up with the cloud of this incident hanging over him” Dickerson said. “He has since gotten his GED, gotten a job, pays taxes and has for the most part stayed out of trouble.”

For his part, Prentiss expressed remorse and asked for a second chance.

“I am sorry for what happened,” Prentiss told Judge Jackson. “I was very young and very stupid. If I could take it all back I would.”

Prosecutors told Judge Jackson they were sticking to their original recommendation for sentencing and added that the victim, who was in the courtroom with her father, did not think Prentiss deserved anything less.

Prentiss was immediately remanded to the custody of the Greene County Sheriff’s Office until he can be transferred to MDOC.

Prentiss’s sentence is longer than the one given to first person sentenced for the crime. Daniel Dustin McLeod, 24, Leakesville, was the only person charged in the case that was an adult at the time of the incident. He was sentenced in 2015 to 15 years in prison and ordered to serve at least eight, with the remainder on post-release supervision. He is currently in the third year of that sentence at South Mississippi Correctional Institution.

McLeod, who was 21 and more than 36 months older than the victim at the time of the crime, was originally indicted on charges of statutory rape, felony child neglect, kidnapping, obstruction of justice and intimidating a witness. However, after he pled guilty to statutory rape in Feb. 2015 prosecutors recommended the dismissal of the felony child neglect and kidnapping charges. Prior to that, he was convicted in Greene County Justice Court for the crime of furnishing beer or wine to a minor, related to the same incident.

Matthew Blake Courtney, 19, of Courtney Drive, Neely, is the other person indicted in the case. Like Prentiss, he was a juvenile at the time of the assault, but is being charged as an adult. Courtney’s case is set for trial in August.