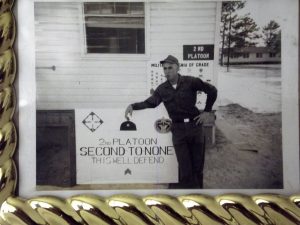 Members of the Sand Hill School Class of 1967 remembered one of their fallen classmates during their recent class reunion. That classmate, PFC Ronnie Dale Fulmer, was drafted for the Vietnam War and did not return home.

Sue Turner, an SHS alumnus and former classmate of Fulmer, brought to light that Fulmer was the only casualty from Greene County in the Vietnam War.

“These reunions are a time of recollection and reflection and we got to talking about Ronnie,” Turner said.

Turner said she and several classmates thought about their former classmate and are in the in the process of placing a memorial stone at the Sand Hill School.

Ronnie Dale Fulmer was born June 21, 1949 to John “JC” L. and Vera Fulmer. He grew up in the Pleasant Hill community with his four brothers and three sisters.

Don Fulmer kindly opened his home to give a glimpse into the life of his little brother Ronnie, a young man just shy of his 21st birthday, who sacrificed his life to save the lives of men he likely barely knew.

“Ronnie loved to watch a soldier show when he was a boy,” said his brother, Don.

After graduating high school, Ronnie Fulmer worked for Singing River Electric Power Association. His brother described him as a “happy-go-lucky” kind of guy and a hard worker.

A young man with plans for life, Fulmer liked his job with the power company and was looking forward to starting a family of his own. He and his fiancé were planning their upcoming wedding when the draft placed him in the Army. Sadly, tragedy struck and Fulmer’s fiancé died in a car accident before they were married. Perhaps theirs is a sweet love story that continues elsewhere, and possibly some perspective of the Master Plan.

PFC Fulmer, Company B, 3rd Battalion, 21st Infantry, 196th Infantry Brigade, was in Vietnam during one of the last few years of the conflict. On January 29, 1970, PFC Fulmer and his brothers-in-arms were on a mission near Dong Tien when they were taken by heavy fire. Fulmer was awarded the Silver Star for his heroic actions that day.

In a letter from the Army dated February 23, 1970, Fulmer was recognized for his quick thinking and quick actions in a grave combat situation. The letter, addressing Fulmer’s Silver Star, stated that he “distinguished himself by intrepid actions.” Fulmer located the enemy fire and, with stealth, positioned himself close enough to discharge grenades amidst the group of hostiles. As he was returning to his Company, he located another enemy troop and reported its location. Fulmer aided several wounded soldiers before he was fatally wounded.

The letter states that Fulmer’s actions “contributed significantly to the success of the mission.” He valiantly risked and ultimately gave his own life to save as many lives as he could. In a moment of courage and strength, Fulmer changed the outcome of the situation.

Fulmer was laid to rest in the Pleasant Hill Cemetery. His brother, Don, proudly shared his brother’s photos and medals, and shared the story of a life of a man that is remembered in death.

We recognize all those that lost their lives in the constant battle to protect the privileges and freedoms of America. Each of these men and women have a story of life that ended suddenly, chapters left unwritten.

The casualties of the United States Armed Forces begin with the American Revolution. Memorial Day was not instituted as a National Holiday until after the Civil War, and even then, it was celebrated in division of the Union and the Confederacy until after World War I. Countless Americans have given their all to ensure the prosperity and security of America and its people.

While the savory smell of ribs and burgers fill the air and most people enjoy a three-day weekend, remember the reason why  – someone gave up the grill, the beach, a sweetheart, their family… all so that others may continue to live freely.