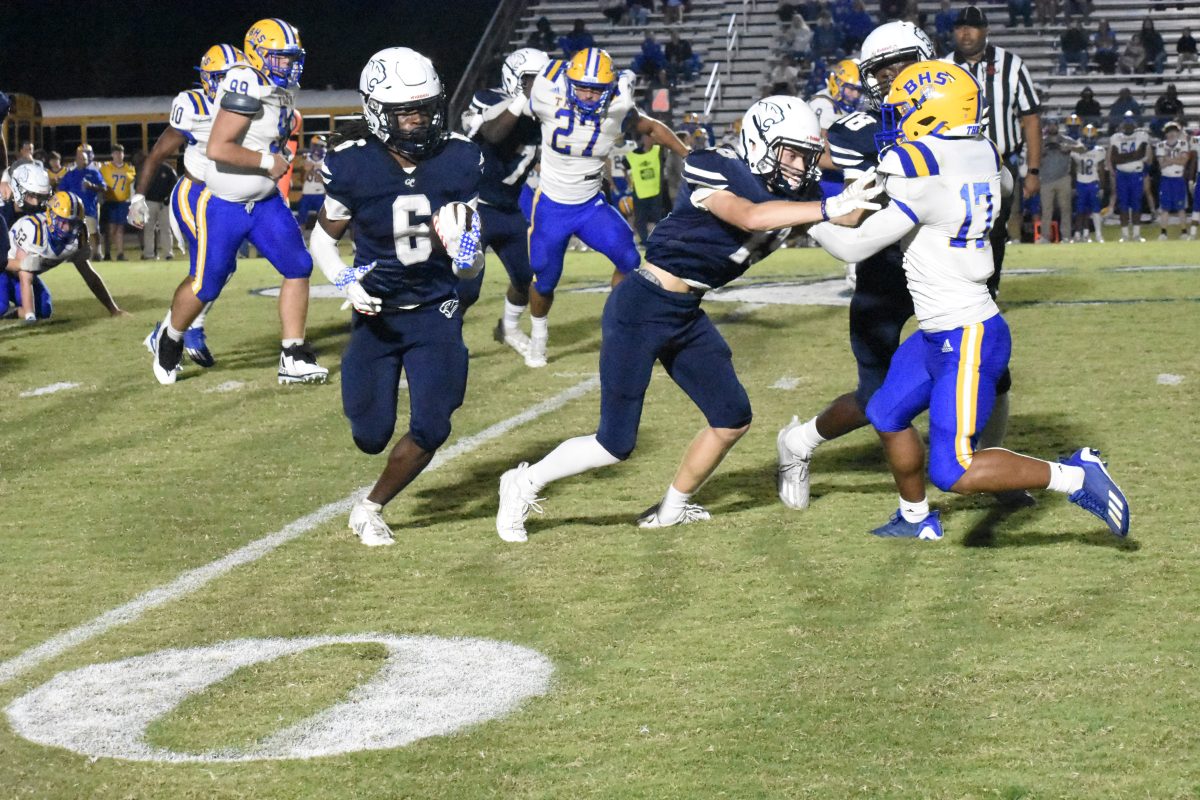 Photo by RUSSELL TURNER / Herald Editor
Greene County senior Kayden ‘K.J.’ Miller is shown following a downfield block by junior Peyton Errington and freshman Jase Walley during the Wildcats’ win over Bay High earlier this year. Miller had a big night for GCHS last Friday at Laurel, with 170 all-purpose yards in the Cats’ win over Northeast Jones, including a 43-yard catch and run for a TD on the first play of the second half. He also had a solid night at linebacker, recording five total tackles in his first defensive action of the season.

The Greene County Wildcats pulled out all the stops last Friday on the road at Northeast Jones.
Needing a spark after a tough loss at Moss Point, the Wildcat coaching staff shook up their lineups on both sides of the ball against NEJ, calling on multiple players to play both ways. The move paid off, shoring up the defensive unit and putting more weapons into play offensively, as the Cats rolled past the Tigers for a 35-10 non-region win.
It was a big win for the Wildcats, who hoped to right the ship before hosting Pass Christian this Thursday in a regular season finale with big playoff implications.
“I am so proud of these players,” Head Coach Mike King said earlier this week. “I have seen teams essentially quit after a couple of tough losses, but our guys didn’t do that. I think that says a lot about our players and our coaching staff too.”
“Every season is different and you have to find ways to adapt and improvise. It is a big adjustment to get guys going both ways, but we needed to do that to try to get more consistency, particularly on the defensive side. We knew we had guys out there who could make plays, but we just weren’t being consistent.”
King signaled last week there would be some changes and that the coaching staff would be mixing in guys on both sides of the ball. It was a move they had looked to put in place earlier in the season, but some key injuries held up that plan.
“One thing it does for you is builds competition during practice,” King added. “I really liked the way our guys responded. Even the guys that saw a little less playing time because of the moves were different when they rotated back in throughout the game. That’s what you hope to see.”
While there was an obvious difference on the defensive side for the Wildcats at Laurel, the offensive unit saw a nice boost as well. GCHS piled up 514 yards of total offense against the Tigers, with several long, sustained drives mixed with a handful of big scoring plays. Coach Mike Kings offense needed seven plays and a fourth down conversion to earn its first 30 yards offensively against the Tigers, but took a 7-0 lead on a 42-yard TD strike from sophomore quarterback Coby King to junior B.J. Johnson on the eighth play.
They stretched the lead to 14 later in the quarter after a 78-yard march. King found sophomore H-back Cole Helton for an 8-yard TD pass to cap that drive.
The Tigers got on the board with a 32-yard field goal midway through the second quarter. GCHS answered with a 58-yard scoring drive to push the lead to 21-3, but Northeast Jones appeared to have all the momentum going into halftime. A 6-yard run with 27 seconds left on the second quarter clock closed the gap to 21-10 with the Tigers set to get the ball first to start the second half.
But, momentum is a quirky thing, and after GCHS turned a poor kick into a fumble recovery to start the third quarter, it had all shifted to the Wildcats. Senior Kayden Miller busted loosed on the very next play, running through and past would-be tacklers to turn a shovel pass from King into a 43-yard TD and a 28-10 lead for Greene County.
An interception by freshman Braedon Spivery, along with a 25-yard return, stopped a promising drive by the home team and put the Cats back in action at their own 37. King and freshman Jase Mathews connected for 58 of the Cats’ next 63 yards, including a 21-yard scoring strike to push the lead to 35-10.
Spivery got his second interception of the game on a deep pass attempt by the Tigers on the second play of the fourth quarter. The young defensive back made a good play on the ball and came down with it at the Wildcat 2-yard-line. The Cats didn’t get the 98 yards they needed to pad their lead, but the 20-play march that followed led them deep into Tiger territory and ended with King taking a knee to run out the clock.
“Honestly, I didn’t even realize we had kept the ball that long,” King said. “Our guys just did a great job of finding ways to convert first downs.”
Coby King had a huge night for the Cats, completing 22-of-27 passes for 376 yards and four touchdowns. While he benefitted from a couple of big plays via the shovel pass, King also made some good throws on the run and some nice deep throws standing in the pocket. He connected with five different receivers on the night and also rushed for 20 yards.
Miller had a solid game for GCHS with 170 all-purpose. He had seven carries for 72 yards and six catches for 98 yards and a TD. Mathews led all receivers with five catches for 127 yards and a TD, while Johnson added six catches, 90 yards and a TD.
Bryson Spivery didn’t let his twin brother show him up, snagging his first three catches of the season for 34 yards and adding 40 yards on a big kickoff return. Junior Keenan Franks was the workhorse out of the backfield with a team-high 11 carries for 45 yards and a touchdown.
Freshman kicker Maisan Tribble continued to make the most of his opportunities and was perfect on his five extra-point attempts.
Defensively, Braedon Spivery’s two interceptions stole the show, but several players had big nights for the Cats. Junior Peyton Errington and sophomore Jairon Brown led the way, with Brown finishing with 6.5 total tackles and Errington logging four solo stops and three assists. Miller, who split time at linebacker with Franks for their first defensive action of the season, finished with four solo tackles and two assists.
B.J. Johnson had 4.5 tackles, while sophomore linebacker Landon Green finished with three solo stops and three assists.

The Wildcats hope to continue their strong level of play when the Pass Christian Pirates come to town for a unique Thursday night game and the regular season finale for both teams.
The Pirates are currently in possession of second place in the region standings with a 2-1 mark against Region 8-4A teams. A win will keep them there, but a win by the Wildcats by a 7-point or larger margin will push them to fourth and Moss Point up to second, behind Stone County. Greene County would move into third place in the standings under that scenario, while a loss would knock the Cats back down to fourth.
“It’s a big game for us, not only because of the region standings, but because we want to be playing at a high level when the playoffs begin, regardless of who we match up with,” King said. The Pirates are 5-3 overall with wins over Long Beach (56-20), Purvis (21-14), St. Stanislaus (21-3), Moss Point (21-20) and Bay High (24-7). Their losses were to Forrest County AHS (31-34), Poplarville (7-42), and Stone County (0-38).
“They have a solid team and a lot to play for, so we expect them to come in here ready to play,” King added. “It’s a short week with the Thursday kickoff and we’ve had some kids out sick this week, so that’s not ideal, but we’re looking forward to the opportunity.”
Game time is set for 7 p.m. Thursday at Wildcat Stadium / Johnny Ainsworth Field.