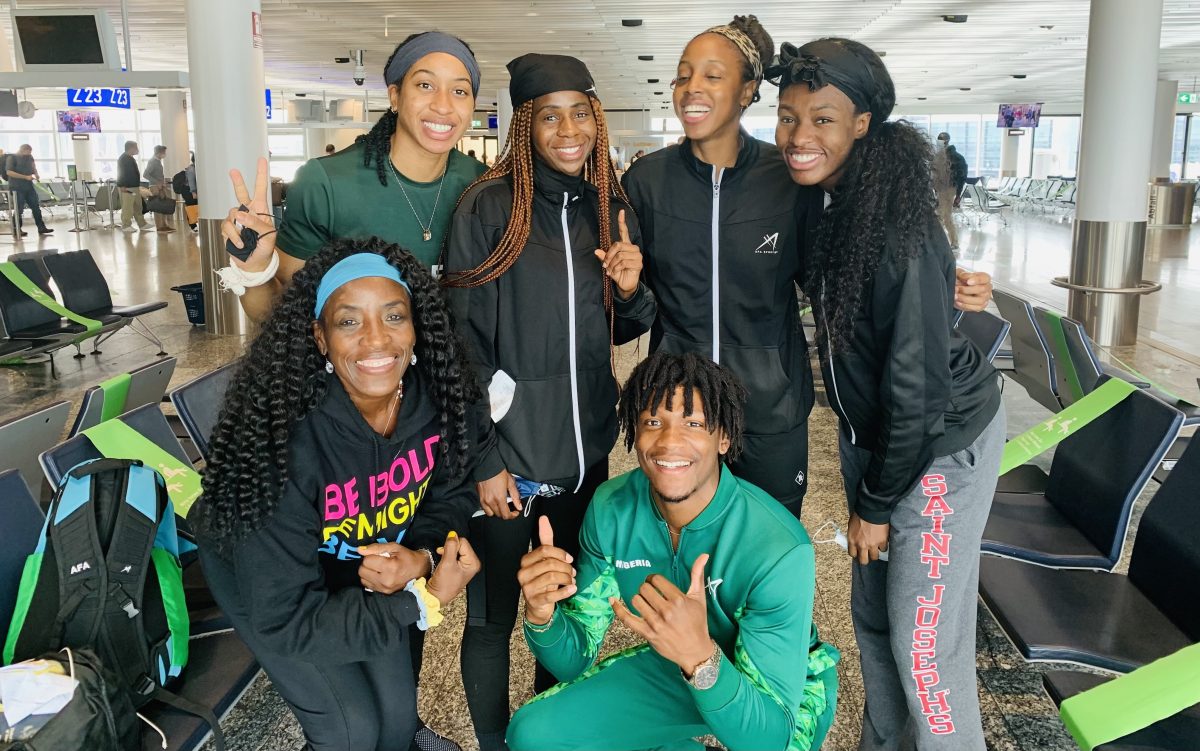 Greene County native and Women’s Basketball Hall of Famer Ruthie Bolton is shown (Bottom left) with members of the Nigerian national team which she is helping coach during the team’s 2021 Olympic run.

Two-time Olympic gold medalist and women’s basketball icon Ruthie Bolton often shares a story about one of her proudest moments as a young girl growing up in McLain — the moment she claims to have first embraced an awe-inspiring Olympic journey that still carries on 40 years later.

Long before Bolton began hurdling obstacles around the globe to help open doors for female athletes in a male-dominated sport, she was hurdling fences around the house with her 19 brothers and sisters. Quite the natural athlete, she was pretty good at it; and her father, Rev. Linwood Bolton, didn’t mind her doing so, “as long as you don’t land on my fence.”

But one particular fence always seemed to get the best of Bolton. Although she had confidently leaped just as high on other occasions, fear and doubt set in each time she attempted to make the jump. 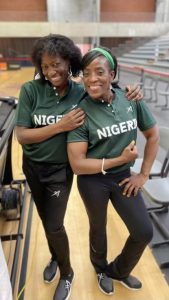 “I remember going inside feeling so unaccomplished because I didn’t get over that fence,” Bolton recalled. “They all said, ‘No big deal, Ruthie! Don’t worry about that fence.’ But it was a big deal to me. I don’t know why that was so important to me.”

Early the next morning, while the rest of her family still slept, Bolton went back outside determined to face her fear. She took a deep breath, sprinted toward the fence and closed her eyes as she took one final step and leaped into the air.

She reopened them to find herself sitting on the other side, having finally accomplished her goal. Even though no one else saw it, Bolton celebrated the feat with excitement, just as she would later celebrate many other feats in front of worldwide audiences on the grandest stage in all of sports.

“I really believe that was the moment that I started embracing my Olympic journey,” Bolton said. “Inner strength and fight go a long way, and I wanted that moment. That moment changed my life.”

The inner strength and fight Bolton discovered that morning ignited her motivation to achieve unprecedented success both on and off the court. In March, the Women’s Basketball Hall Of Fame inductee, published author and public speaker even took on the challenge of competing on NBC’s American Ninja Warrior, just two months prior to her 54th birthday.

And she’s far from finished. Bolton has begun a new chapter in her Olympic journey as an assistant coach for the Nigerian Women’s National Team, which is set to compete in the 2021 Summer Olympics next month in Tokyo. When asked why she decided to take on this new challenge, Bolton explained that it wasn’t necessarily her decision to make. It was a divine calling.

“Who would’ve ever thought that this Mississippi girl would ever play in the Olympics, let alone become a coach for an Olympic basketball team?” Bolton asked, as if she still couldn’t believe it herself. “This wasn’t man’s doing. God designed it to be this way.”

Having recently been eager for an opportunity to coach, the miraculous timing of the offer served as the only proof this preacher’s daughter needed.

“I had been turned down for a lot of jobs because I didn’t have a ton of coaching experience,” Bolton shared. “I started praying for the right opportunity to open, and that’s when Coach Otis (Hughley Jr.) called and asked me to join his staff. He said he could’ve found a lot of other people who knew all the X’s and O’s, but finding someone whose story could truly impact his players’ lives was like finding a needle in a haystack.”

Bolton gladly accepted, not only willing to share her story but obligated to give back to the game by inspiring younger generations to continue raising the bar for female athletes.

The Nigerian team, also referred to as D’Tigress, has made waves in recent years as one the best teams in Africa, winning back-to-back FIBA Women’s AfroBasket titles and qualifying for the Summer Olympics for the second time since its 2004 debut in Athens.

However, there are still a number of obstacles to overcome — one being its next opponent on Tuesday, July 27 in Tokyo. Nigeria will open group stage competition against the U.S. Women’s National Team, the team that’s taken the gold in every Summer Olympics since 1996, when Bolton herself helped lead a legendary squad to a perfect 60-0 record.

The game will be D’Tigress’ third against Team USA in as many years. The first was a lopsided 71-40 defeat in the 2018 FIBA Women’s World Cup Quarterfinals, but they caught many off guard in 2020 by giving the Americans a run for their money in a 76-71 loss at the Olympic Qualifying Tournament in Serbia.

When it comes to taking on the tallest tasks in women’s sports, however, few know more about what it takes to beat the odds than “Mighty Ruthie,” who continues encouraging the Nigerian players to be bold in the face of their fears and find the greatness within themselves — just as she learned in her yard one morning as a young girl in Greene County.

“I told them this is bigger than basketball,” Bolton said. “This message doesn’t stop when the ball stops bouncing. A lot of little girls will be watching them, and they’ll have the opportunity to impact the lives of people they’ll never meet. I want them to walk with grace, humility and strength, be grateful for this experience and give everything they’ve got.

“I was sent here to encourage them to be bold.”