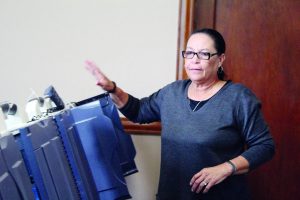 Greene County Election Commissioner Lisa Bivens is shown opening a row of voting machines for their pre-election testing of the equipment. Poll workers were at the courthouse Tuesday through Wednesday testing voting machines for accuracy. Each machine was tested, calibrated and resealed until elections next Tuesday. Workers said extra machines are tested as well in case of any issues during elections.
Photo by Annette Harvison

The Nov. 5 General Elections will be held Tuesday, and this year holds the potential for big changes, not just in state offices, but for local government representation as well.

Candidates have been making the final push to get out their messages in recent weeks and the Greene County Election Commission has been preparing for the elections by having voting machine training and poll worker training.

Polls will be open from 7 a.m. until 7 p.m. on Tuesday for the election.

Absentee voting will continue through this Saturday, Nov. 2, at noon, for anyone interested and eligible to vote by absentee ballot.  That is the deadline for voting absentee in the office.  If a ballot was mailed to a voter, that ballot must be received by mail at the Circuit Clerk’s office by 5 p.m. on Monday, Nov. 4.  For questions about absentee voting, contact the Greene County Circuit Clerk’s office at (601)394-2379 or visit the Mississippi Secretary of State’s website at www.sos.ms.gov/vote.

Among the county-wide positions on the ballot this election cycle, only the offices of sheriff and chancery clerk drew challengers. Greene County Sheriff Stanley McLeod, who is seeking re-election on the Democratic ticket, did not draw a primary challenge, but will face off against Republican Larry Byrd of Neely in the General Election. Incumbent Chancery Clerk Michelle D. ‘Shelley’ Eubanks is in a similar position in the sense she did not draw a primary challenger, but will have an opponent when voters go to the polls in November. Former Dist. Four Election Commissioner Sarah James, who resigned from that post late last year, is challenging Eubanks as an independent.

Other races at the district level have been competitive since candidate qualifying began in January. At least three new supervisors, and possibly and entirely new board, will be sworn into office before the start of the new term in January. Two incumbent supervisors did not seek re-election, while a third was defeated in his party primary. There will also be a new justice court judge and constable from the county’s Post 2.

On the state level, numerous positions are up for grabs with officials like current Gov. Phil Bryant not seeking re-election due to term limits, aspirations for higher office or a combination of the two.

With Bryant wrapping up his second and final term in the Governor’s Mansion, a total of 12 candidates tossed their hats into the ring for the state’s top executive position. Current Lt. Gov. Tate Reeves won the Republican Primary and will face off against current Attorney General Jim Hood, who won the Democratic nomination, and Bob Hickingbottom (Constitution Party) and David R. Singletary (Independent).

The offices of Lt. Governor, Secretary of State, Attorney General, State Auditor, State Treasurer, Commissioner of Agriculture and Commerce, Commissioner of Insurance and the northern, central and southern district commissioners for the Department of Transportation and Public Service Commission are also up for grabs this election season. District Attorney for the 19th Judicial District is on the ballot, but incumbent Angel Myers McIlrath (R) is unopposed as she goes for her first full term after being appointed to the post after former D.A. Tony Lawrence ran unopposed and was elected to the Mississippi Court of Appeals. Other incumbents without challengers in state races include State Auditor Shad White, and Southern District Transportation Commissioner Tom King.

Vying for State Treasurer are Democrat Addie Lee Green and Republican David McRae, while Democrat Rickey L. Cole and Republican Andy Gipson will face off for the right to serve as the state’s Commissioner of Agriculture and Commerce.

Also on the ballot are the area’s legislative seats, including two state representative and a state senate seat. Incumbent Dist. 43 Senator Dennis DeBar (R-Leakesville) is unopposed in his bid for a second term, as is incumbent Shane Barnett (R-Waynesboro) who represents a small portion of the county in the State Line area in the House of Representaives (Dist. 86).

For a more complete breakdown of the individual state and regional races, readers are encouraged to visit www.mississippitoday.org/voter-guide-2019/ to check out Mississippi Today’s 2019 Voter Guide. The online newspaper compiled a lot of information on candidates across the state and is a great opportunity for voters to become better informed about the candidates, their backgrounds and their platforms for election.

Candidates and their supporters are reminded that no campaigning is allowed within 150 feet of any polling place in the county.  This includes wearing t-shirts with a candidate’s name, car magnets, bumper stickers, hats, etc.  Voters with such will be asked to remove or cover these items prior to entering a polling place.

Voter ID has been required since the voters in this state approved a constitutional amendment, and the process was implemented in 2014.  All voters are required to present current, valid, government issued photo identification to vote.  There are no exceptions.
“Poll workers are instructed to ask every voter for identification, regardless if it is their neighbor, their family, or even their mother,” Circuit Clerk Cecelia Bounds said. “Should a poll worker intentionally fail to require identification prior to voting, they will be considered guilty of corrupt conduct, which may result in jail time.”
Bounds said voters who do not present photo identification are allowed to vote an affidavit ballot (on paper), and they are instructed to present photo identification to the clerk’s office within five days of the election to have their vote counted.

Mississippi statute states that only one person may enter a voting booth at a time unless a person is blind, disabled, or unable to read or write.  If a person does not know how to operate the machines, a poll worker may assist any voter to get them started, but cannot assist the voter in casting their vote.
“Not knowing who to vote for does not qualify a voter for assistance in the voting booth,” Bounds added. “Voters are encouraged to study their ballot prior to going to the poll so there will be less confusion when voting.”

Voting precincts happen to be one of the places we meet our neighbors that we rarely see until Election Day.  However, “visiting” at the polling place is strictly prohibited, and poll workers have been instructed to keep the area clear.  Only election officials, credentialed poll watchers, and voters waiting to cast their votes may be at the polling place during poll hours. Once a voter casts his or her vote, they should exit the building.  Loitering within 30 feet of any entrance to the polling place will not be allowed.