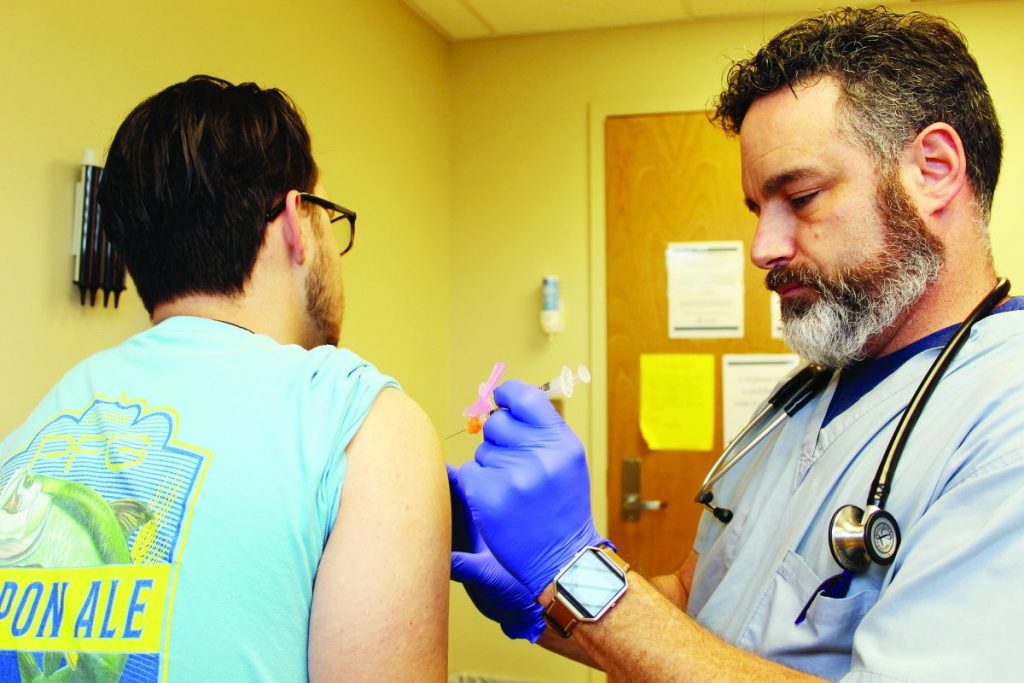 Leakesville nurse practitioner Jason Box is shown giving a flu vaccine injection to an unidentified patient on Tuesday. Health officials encourage most residents to get the flu shot to help avoid contracting the virus.
Photo by Annette Harvison / Herald Staff

The 2019-20 flu season is getting underway, and now is the time to get your flu vaccinations. The Center for Disease Control recommends getting your flu shot soon for the best protection against the flu.

Flu season typically gets heated up during October and November, and the season lasts through March, sometimes as late as May. Flu vaccinations begin to be distributed and available to the public in September, and each year, the vaccine is manufactured according to CDC recommendations as to what strains of the flu virus are likely to be the most active during the given flu season.

Family Nurse Practitioner Jason Box at Greene County Family Medical Center said this year’s vaccine is a quadrivalent vaccine, meaning that it covers four strains of the flu virus. He said now is the time to get vaccinated for the flu, and everyone from infants to adults should get protected.

“Children six months and older can get the vaccine,” Box said. “Some younger children require two shots to be fully vaccinated, as well as some elderly patients.”
Box said that infants and the elderly are the most at-risk groups of contracting the flu virus. Those undergoing cancer treatments or taking medications that can weaken the immune system are also at a higher risk of catching the flu. People coming in contact with those that are at a higher risk should consider getting the flu vaccine to protect not only themselves, but also the immunocompromised relatives, friends or patients. Box said the flu paves a path for other illnesses to take over once the immune system has been weakened by the flu virus.

“The number one infection following the flu is pneumonia,” Box said. “People don’t die from the flu. They die from secondary infection.”

There are no cures for the flu. The virus generally lasts five to seven days. Tamiflu has been around for many years and is said to shorten the symptoms of the virus, but it does not kill it. Tamiflu is taken over the course of several days. A new flu medication is on the market this flu season, and like its cousin, it is supposed to shorten the duration of symptoms. The new drug, Xofluza, has one advantage that its predecessor does not. Xofluza is given as one single-dose. However, Box said the medication may not be a cost-effective solution for some as it will likely be similar in cost to Tamiflu. With either medication, timing is key to its effectiveness.

“You have to begin the medicine within 24 to 48 hours of the onset of symptoms,” Box said. “If you don’t start taking it in that window, it won’t be effective. And antibiotics do not treat the flu.”

No one likes having the flu. It’s a miserable sickness. Some people are the first in line to get vaccinated every year, and some people do not get the vaccine at all. The vaccine is not guaranteed to be 100 percent effective against preventing the flu, but many people count on its effectiveness each year.

“The number one way to prevent the spread of the flu virus is to wash your hands,” Box said. “And if you do get diagnosed with the flu, stay home. Do not go out to eat, or to watch a movie. Stay indoors until you have been fever free for 24 hours.”

Box said that if you do find yourself home with the flu, stay well-hydrated, treat the fever and rest. If symptoms last more than five days with no improvement, then schedule a visit with your doctor.

The CDC reports that each year, less than half of the U.S. adult population gets vaccinated against the flu. Official reports indicate 45.3 percent of Americans 18 years of age and older got their flu vaccination for the 2018-19 flu season compared to 62.6 percent of children ages six months to 17 years of age. Both figures are up from the previous year. Health care professionals lead the way in flu vaccines, with a reported 81.1 percent in settings where employees are not required to get the shot.