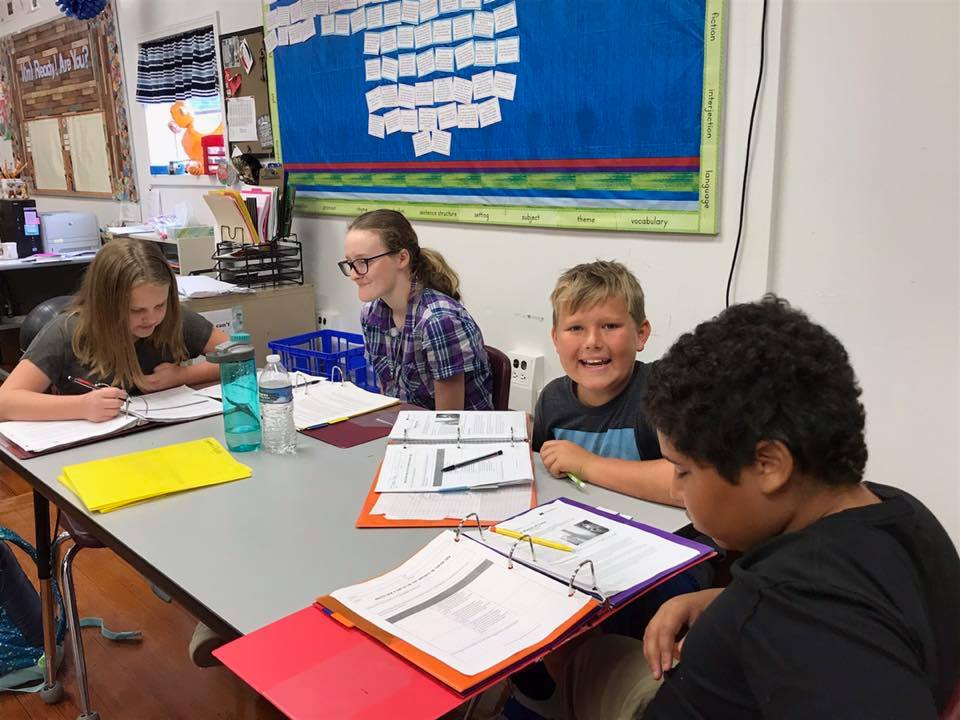 Contributed Photo
Students at McLain Attendance Center are shown analyzing text to find details that support the main idea of a story they were reviewing in April Howell’s middle school language class. The students are (L-R) Emma Pugh, Everlee Pugh, Logan Pierce and Douglas Johnson. Their school earned a ‘B’ rating from the Mississippi School and District Grading System, according to a report released Tuesday.

LES earns ‘A’ rating, GCHS ranks 11th among all high schools in state

The Greene County School District has earned its highest-ever accountability score and is in the top third of all Mississippi public school districts in terms of student performance.

Unofficial results from the Mississippi School and District Grading System were released Tuesday and the GCSD earned an overall ‘B’ rating and earned a score of 645 points out of a total of 1,000 possible points. Individually, one county school earned an ‘A’ rating, while two campuses earned ‘B’s and two earned ‘C’ grades. Ratings will be made official at a meeting of the Mississippi Board of Education on Thursday.

Petal School District was the top performing district in the state with a score of 754 points. Greene County settled in just above neighboring George County in 50th place out of 145 districts in the state.
The news marks the third time in the past four years the local school district has been able to claim its highest accountability score ever, something Supt. of Education Charles L. Breland says is worth celebrating.

“We are very excited and proud of the continued progress being made in our schools,” Breland said. “We are the highest ranked district in the area because we have quality teachers and quality administrators putting our kids’ educations first and foremost.”

According to the Mississippi Department of Education (MDE) website, the A-F grading scale is a way to identify how well students are performing in school.

“Mississippi’s school grading system considers several indicators, including how well students perform on state tests, whether students are showing improvement on those tests from year to year and whether students are graduating within four years,” the MDE website states. “The system also factors in how well schools are helping their lowest achieving students make progress toward proficiency.”
Leakesville Elementary School earned the district’s only ‘A’ rating this year and growth by lower-performing students played a key factor at LES, which showed a 200-point improvement over the previous year and jumped to the highest rating after earning a ‘D’ grade last year.

“The staff and students at LES worked very hard and we are very proud of the achievement,” Breland said. “The big challenge is going to be continuing to show that type of growth, but we are confident LES and all of our schools will continue to excel.”

LES Principal Shallonda Hollingsworth said she was proud of her students and staff for their hard work and extremely pleased with the school’s success as measured by state-mandated tests.

“When we were notified of the scores, I was so thankful,” Hollingsworth said. “I credit this accomplishment to our dedicated teachers and assistants, who come ready to give their all to L.E.S. students each and every day; the committed parents, who continue to support and encourage their children; also the faithful members of the community, who work tirelessly to broker the continued success of our children and schools.”

“These results just reaffirm the teaching in the classroom, the hard work taking place every day, and our focus on building relationships. At the same time, there is so much more to our success than what is measured by test scores. Our entire staff, which includes our support personnel as well as our teachers, dedicates time and effort to help our students achieve inside and outside the classroom. We are blessed to live and work in such a supportive and committed community.”

“Leakesville Jr. High is our lowest rated school, but it also has the greatest challenges in our district,” Breland said. “LJHS is the only school we have that has every grade being tested (grades 5-8) and we have struggled with teacher turnover and consistency there as well.”

The A-F grading scale for schools was instituted by a 2013 vote of the Mississippi legislature. The MDE website indicates the grading scale illustrates the following:
• how well students are performing in math and English language arts on state assessments;
• whether students in the school are meeting annual expected growth in math and English language arts;
• how well students are performing in U.S. History and Science;
• whether high school students are graduating on time;
• whether students are participating in and performing well in accelerated coursework, such as Advanced Placement (AP), International Baccalaureate (IB) classes, and dual credit college courses;
• how students perform on the ACT college entrance exam;
• whether there are large differences between the achievement levels among students, especially students who receive additional educational services; and
• whether a school is performing above expectations.

The scores do not reflect how well individual students or teachers at the schools are doing.

Across Mississippi, public school districts and schools showed broad improvement under the state’s A-to-F grading system in 2018-2019 as the number of A-rated districts rose from 18 to 31, while the number of districts earning a C, D or F rating all fell.

Some rural schools that teach grades K-12 or grades 7-12 benefitted from a change in the scoring system meant to put them on level ground with four-year high schools.

At least 10 districts scored an F for the second time in three years, making them eligible for a special state-controlled district for troubled schools.

George County School District was the next highest performing district in the state behind Greene County. Richton, Wayne County and Perry County school districts all came in as ‘C’ rated districts, according to the unofficial results.

LES was the only school in Greene, George, Wayne or Perry counties to earn an ‘A’ rating. In Perry County, Richton Elementary, South Perry Elementary earned ‘B’ ratings. In George County, Central, Agricola and Rocky Creek elementary schools earned ‘B’ ratings . Benndale and L.C. Hatcher in Lucedale were rated as ‘F’ schools. In Wayne County, Clara Elementary was a ‘B’ school, while Beat Four and Wayne Central posted ‘C’ ratings.
Greene County High School was the 11th highest rated high school in the state, coming in just ahead of D’iberville and one spot behind Vancleave. George County High School earned a ‘B’ rating, while Perry Central, Wayne County and Richton high schools earned ‘C’ ratings.