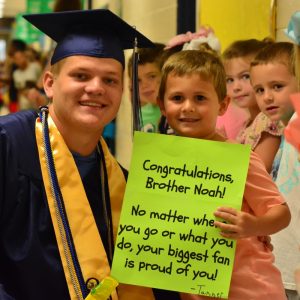 GCHS senior Noah Mitchell got a special welcome from one of his biggest fans on Thursday as members of the GCHS Class of 2019 walked the halls at Leakesville Elementary School to encourage the younger students to work hard on their educations.

It is graduation week in Greene County and excitement is building for the Class of 2019 as Thursday and Friday’s ceremonies approach.

But, before you head out to GCHS for the festivities, there are few things school officials want you to know, beginning with just how they fell about this graduating class.

“It’s an exciting time here at our school,” GCHS Principal Scott Bray said on Monday as graduation week got underway. “As a parent of a graduate myself I can tell you there are a lot of mixed emotions right now, but mostly we are all just excited and happy for these young men and women as they take this giant step in their lives.”

“As educators, myself and the staff here at GCHS are very proud of this class. This is another exceptional group of students and we have very high expectations for them and what they are going to mean to the future of this community and world.”

There are also some logistical details school officials wish to share with those planning to attend Class Night on Thursday and Commencement on Friday.

First, both events are open to the public and community members are encouraged to attend. Thursday’s event will be held in the GCHS gymnasium and will begin at 7 p.m. Bleacher seating will be available on a first-come-first-served basis. Immediately after the awards and recognition, a reception will be held in the school cafeteria. That can make for slightly tight quarters, but there will be plenty of room outside the cafeteria as well for attendees to visit with graduates.

Friday’s Commencement will be held in Wildcat Stadium and seating will be available in the bleachers on both sides of the football stadium. Seating for elderly and handicapped attendees will be available on the school track, but anyone planning to utilize these areas should plan to bring their own chairs.

There is plenty of parking on campus and across the street at the Rural Events Center. Attendees parking on the visitors’ side of the stadium are asked to be aware of the orange parking cones as they will be placed to protect the sprinkler system on the practice football field.

During the program, school officials are asking family members and friends to show respect for all graduates and other attendees and avoid shouting or using noise makers. This is particularly important during the presentation of diplomas as each graduates name is called.

“We realize that family and friends are proud of their graduates and want to show their support,” Bray said. “But, we are asking that everyone refrain from shouting or clapping when their graduates’ names are announced so that each name can be clearly heard.”

“This is a big moment for each graduate and they all deserve to be able to hear their names being called.”

Bray said the concessions stand would be open for drinks only after attendees in the past had made that request.

Of course, all the plans for graduation night are assuming good weather, but what happens if rain showers try to dampen the party?

“The forecast for Friday looks pretty good with only a slight chance of rain, but we have backup plans just in case,” Bray said.

If weather does force changes, Bray said Commencement would be moved indoors to the school gym and that graduates would be given five tickets apiece for guests of their choosing. Live video of the ceremony would also be streamed to a large screen in the school cafeteria.

“Hopefully, we will be blessed with good weather and we can hold the event outdoors,” Bray said. “But, if not, with everyone’s help and patience we can make every effort to make this a memorable and happy experience for our graduates and their families.”