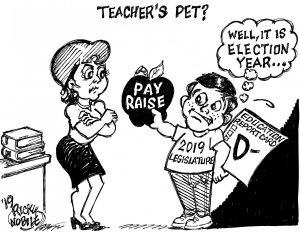 JACKSON, Miss. (AP) — Mississippi’s state senators on Wednesday voted to advance a plan that would raise public school teacher salaries by $500 a year over two years, for a total of $1,000.

The unanimous vote on Senate Bill 2770 came despite continued questions about whether the state could afford more. The package is projected to cost more than $100 million over two years.

“What do I say to my constituents who say our educator pay raise is a joke and it equals only $50 a month and you’re just doing this because it’s an election year?” asked Sen. Derrick Simmons, a Greenville Democrat.

Senators on Wednesday amended the proposal to pay the raise to teachers at one time as a bonus. Republican Sen. David Parker of Olive Branch and Democratic Sen. Angela Turner-Ford of West Point argued teachers would appreciate the money more in one lump sum and would think more fondly of lawmakers.

“That would be a help they would appreciate and they would see a lot more,” Turner-Ford said.

In addition to teachers, the measure would also boost the long-frozen salaries of assistant teachers from $12,500 to $13,500 over the same two-year period. The Mississippi Department of Education says there are 31,000 teachers and 3,500 assistants statewide. An additional number of certified counselors and librarians would also be covered.

The Senate rejected an amendment proposed by Democratic Sen. David Blount of Jackson to abolish the state’s program that pays bonuses to some teachers at schools that get an A or B or improve a letter grade in the state’s rating system. Blount wanted to use the $25 million spent on that program this year to boost raised to $2,000 total, or $1,000 each year.

The bill moves to the House, which has been considering a proposal for an identical raise, but it’s unclear whether that amount will be the last word on the subject. Some lawmakers have said discussion on the amount of the proposed pay raise would continue throughout the session.

Democrats and teacher groups have been deriding the pay plan as too small, but Republicans said that’s what the state can afford, considering other needs.

“I think many in here support giving as much pay raise as we can offer,” said Sen Brice Wiggins, a Pascagoula Republican. There are other things in the budget we have to look at.”

The National Education Association, a teachers union, said Mississippi had the lowest average salary among the states at $42,925 in the 2016-2017 school year. The state Department of Education says the average teacher salary was a little higher, almost $45,000 in 2017-2018.

Teachers in states including Arizona, Colorado, Kentucky, Oklahoma and West Virginia have gone on strike during the past year to demand higher pay. Educators in Mississippi have shown no sign that they plan on doing the same.
___
Follow Jeff Amy on Twitter at http://twitter.com/jeffamy.