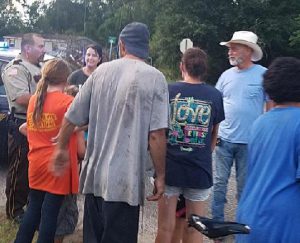 Greene County Deputy William Darr is shown (Left) talking with witnesses after McLain Mayor Steve McCluskey (second from right) apprehended a woman who had reportedly been cursing, threatening and exposing herself to children.           (Contributed Photo)

The mayor of a Greene County municipality is being credited with helping apprehend a woman who was walking through his town flashing and threatening residents.

McLain Mayor Steve McCluskey was at home early Wednesday evening when members of a nearby church called looking for help after a woman showed up at the house of worship acting erratically. Witnesses say the white female approached a group of kids outside First Pentecostal Church of McLain and began cursing and threatening them. She reportedly also exposed her breasts to the children.

The woman left the scene after adults from the church confronted her. McCluskey, who has past experience in law enforcement, encountered her shortly afterwards and was able to apprehend her on Main Street just a couple of blocks from his home.

Assistance came shortly from Greene County Deputy William Darr, who took the woman into custody. However, witnesses say the woman began acting out violently in the back seat of the cruiser, slamming her head against the wire security partition between the front and rear seats, causing injuries to her head and face. She was later taken by ambulance to a Hattiesburg hospital for evaluation and to be treated for minor injuries.

The name of the woman was not immediately available, but she is said to be a Greene County resident, familiar to police due to previous drug-related incidents. Multiple charges are expected to be filed against her.

The Greene County Herald will update this developing story as details emerge.