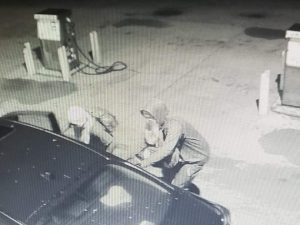 The Greene County Sheriff’s Office is asking for help identifying several suspects in an attempted burglary at a convenience store near Leakesville early Thursday morning.

Manager Tianey Hillman posted several photos on Facebook Thursday morning that were taken from security video at The Junction, located at the intersection of Hwy. 594 and Miss. 63. According to Hillman’s post on the social media site, four suspects cut door locks and attempted to kick in doors to gain access to the building. The time stamp on the photos posted indicates the attempted break-in occurred just before 2 a.m. Thursday. The suspects on the video are shown with their heads and faces covered, but the photos show them getting out of what appears to be a black Infinity sedan with a sunroof.

According to Sheriff Stanley McLeod, thieves matching the same description and riding in a car also matching that description are suspected in an attempted break-in at a Jackson, Ala. pawn shop later Thursday morning.

Images and information on the attempted heist at The Junction can be viewed HERE!

Anyone with information that could assist in the investigation is asked to contact the sheriff’s office at (601)394-2341. Residents can also make reports anonymously by calling the CrimeStoppers hotline at (877)787-5859, or texting the info along with “CSTIP” to 274637.