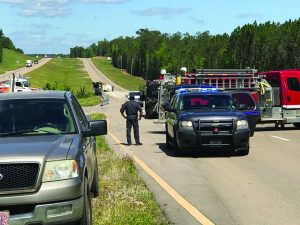 Emergency responders are shown keeping their distance from a tanker truck overturned on US 98 Wednesday morning as a crew assesses damage to the truck. The wreck is forcing officials to close the 4-lane highway in both directions for the cleanup process.

Traffic in Leakesville is expected to increase dramatically this afternoon after public safety officials close U.S. 98 near McLain in the aftermath of an auto accident.

A spokesperson with the Mississippi Highway Patrol said just after lunch Wednesday that traffic would begin to be detoured off the 4-lane highway around 2:30 p.m. The temporary highway closure comes in response to a wreck and rollover of a tanker truck just before 8 a.m. Wednesday. The single vehicle accident occurred on U.S. 98 near the intersection with Midway Church Road. There were no serious injuries in the accident, but the tanker was hauling trimethylamine anhydrous gas, which authorities say is very flammable and very toxic.

Both lanes of U.S. 98 will be closed in the vicinity of the wreck at 2 p.m. and will remain closed until crews can offload the gas from the damaged tanker and clean up the accident site.

Greene County Emergency Management Director Trent Robertson is on the scene and said some residents near the site have already been evacuated. Robertson said the threat to the general public outside the immediate area is limited, due to the fact the accident occurred in a rural, sparsely-populated part of the county.  Despite that, he said, officials are taking the matter very seriously and taking all precautions.

It is unclear how long the cleanup will take. Motorists are encouraged to avoid the area entirely until further notice. Officials also encourage all motorists in the area to use extreme caution on local highways and city streets due to the heavy increase in traffic expected from the detour.