By RUSSELL TURNER
Herald Editor
Friends and family are mourning the death of a Leakesville teenager who died Monday from injuries sustained in a weekend auto accident.
Mason Rayborn Clark, 19, passed away Monday afternoon in a Jackson hospital. Clark was the only occupant in a single vehicle accident that occurred on Miss. 57. According to Mississippi Highway Patrol Public Relations Officer Travis Luck, Clark was northbound on Hwy. 57 near the intersection with Forrest Breland Road when the accident occurred. Luck said the 2008 Chevrolet pickup Clark was driving left the roadway momentarily and that it appears Clark may have overcorrected, causing the vehicle to begin to roll.
The pickup came to rest in the highway, but Clark was ejected from the vehicle. He was taken by ground ambulance to Greene County Hospital before being transferred by air ambulance to Forrest General Hospital in Hattiesburg and then on to Jackson.
Clark was reportedly on his way home from work at the time of the accident. MHP reports indicate he was not wearing a seatbelt.
Clark is the son of Rayborn and Missy Clark. The young man graduated from Greene County High School this past May with the Class of 2017. Principal Scott Bray said the news of Clark’s death weighs heavy on friends and former teachers at the school.
“We are all saddened by the loss of a beloved former student,” Bray said Monday afternoon. “We lost a great Wildcat today.”
“Mason was truly loved by everyone here at GCHS. He always was so kind and respectful to everyone. I am blessed to have known him and his wonderful family for many years. Our hearts, prayers and condolences go out to his family.” 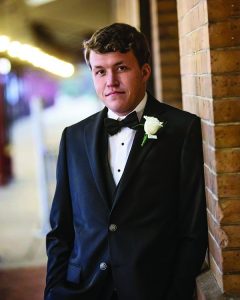 Mason Rayborn Clark
Leakesville
Funeral services will be held Friday, April 13 at 10 a.m. for Mason Rayborn Clark, 19, who passed away April 9, 2018, in Jackson.
Visitation will be held Thursday, April 12 from 6-9 p.m. at the church.
Clark was a life-long member of First United Pentecostal Church of Leakesville.
He had earned his Associates Degree in Welding Technology at Jones County Junior College. He was planning on pursuing a Construction Management Degree from the University of Southern Mississippi as well and was attending classes in welding and pipe fitting through the Jones County Junior College Greene County Center.
He was an outdoorsman and loved to spend as much time as possible outside, especially hunting, fishing and spending time with his friends. He was loved and will be greatly missed by all who knew him.
He is survived by his parents, Rayborn and Missy Clark; sister, Allie Williams and brother-in-law, Cameron Williams; grandparents, Ronnie and Charlotte Clark and Deborah Dial; aunts and uncles, Kayla and Chris Dobbins, and David Dial; cousins, Dustin and Kalyn Dial, and Chloe and Isabella Dobbins; and many other cousins, relatives and friends.
He was preceded in death by his grandfather, Buddy Dial; great-grandparents, Millard and Ethel Clark, Delane Hillman, Hazel Hillman, Robert Bryant and Ida Dial, Max and Anna Dueitt.
Rev. Irvis Dale Everette will officiate the services.