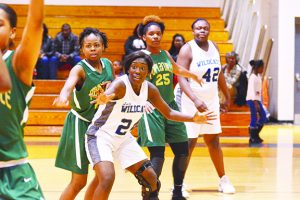 Photos by Shelley Mitchell
GCHS senior Tori Moulds is shown looking for an inbound pass in the Lady Cats 30-point win over Poplarville last Friday. Moulds scored 10 points in the win as GCHS improved to 8-2 in region play.

By RUSSELL TURNER
Herald Editor
The Greene County High School basketball teams finished region play on a high note last week, sweeping Poplarville on the road.
The GCHS Lady Wildcats improved to 8-2 in the region with an impressive 30-point win over the Lady Hornets. It was the sixth consecutive win for Coach Dale Kimble’s team as they hope to carry the momentum into next week’s region tournament at Lawrence County.
“I thought we played very well,” Kimble said. “The girls played very hard and earned a good win.”
“We played a lot of younger players and they really performed well in the fourth quarter.”
In all, 11 Lady Cats scored points in the 66-36 win. Sophomore Kyla Brown led the way with 14 and also pulled down five rebounds. Seniors Beyonce Higgins, Tori Moulds and Ranisha Gunn followed closely behind Brown and combined for 31 points. Higgins had a great overall performance with 13 points, seven rebounds, four assists and six steals. Moulds had 10 points and seven rebounds, while Gunn added eight points.
Sophomore Destiny Eubanks had six points and four assists. Also getting in on the scoring were Nykerria Bolton, Kat Garrett, Shaniyah McCann, Karleah Malone, Lajalla Hardy and Kelsie Mitchell.
On the boys’ side, GCHS bounced back from yet another close loss earlier in the week to claim a key 50-33 victory on the road.
Seniors Derrick Grice, Larue Weaver and Anthony Blakely paced the Wildcats with a combined 32 points. Grice led the team with 12 points, while Weaver and Blakely had 10 each.
The win assured the Cats of no worse than a fourth place finish in the region, but possibly as high as No. 2. They suffered a disappointing 1-point defeat last Tuesday at Sumrall. It was the sixth time in seven losses that GCHS lost either in overtime or by a single point.
“It is tough to lose like that,” Coach Phillip Ricks said. “We just haven’t been able to finish at the end, but at some point these close battles will have to pay off for us. Hopefully, that will start to show in the tournament next week.”
Matchups for the tournament, which gets underway on Monday were not known at press time.
Both teams have one more game to play before the postseason as George County comes to visit this Friday. It will be senior recognition night for both teams with the girls kicking things off around 5:45 p.m.
“We need a great crowd to come out Friday night and cheer on these players,” Kimble said, referring to senior recognition night.