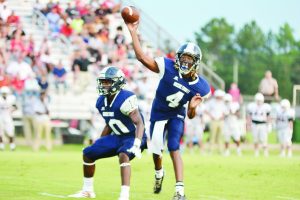 Senior quarterback Derick Grice delivers a pass behind the protection of Kyemonte Walker during the Cats’ season opening win over W. Lauderdale.
Photo by Shelley Mitchell

By RUSSELL TURNER
Herald Staff
The Mike King era at Greene County High School got off to a positive start on Friday as the first-year coach led his Wildcats to a 12-0 shutout of visiting West Lauderdale in the regular season opener for both schools.
Greene County gave up a disappointing four turnovers, but controlled the game from the onset, particularly on the defensive side of the ball. And, while the new skipper knows his team has plenty of things remaining to work on, he said he was very pleased with the way his team competed against the Knights and encouraged by the way the Wildcats reacted after the win.
“The atmosphere in the locker room after the game was about as genuine as I’ve ever been associated with,” said King, who was hired earlier this year to replace local coaching legend Johnny Ainsworth. “It was very exciting to be a part of that.”
“I think it was a good start for us. West Lauderdale is a solid team that won 12 games in a row last year. We’ve still got plenty of things to correct, but overall I am pleased with the way we played. There were a lot of positives.”
Arguably the biggest ‘positive’ was the performance of the Wildcat defense. First year defensive coordinator Jacob Aycock’s unit started out strong and finished stronger as they held the Knights to just 140 total yards of offense and buckled down late with a near-goal line stand to secure the shutout.
The Wildcats held West Lauderdale to just one third down conversion on 11 tries and also forced three turnovers. GCHS dominated the line of scrimmage and held the Knights to just 46 yards on the ground. The visiting team did manage to complete 12 passes for 94 yards, but most of that came on their final possession when the Wildcats were surrendering the short passing game in a prevent defensive scheme.
“I thought our defensive line, particularly, had a very good game for us,” Aycock said. “Especially, when you consider the number of guys we had getting their first real varsity experience and the way we interchanged them throughout the game.”
“Our guys did a good job of attacking the ball and taking care of their assignments. There is plenty of room for improvement, but I thought it was a good way for us to start the season.”
Coach King agreed, saying he really liked how his defenders were “fast to the football.”
“Their reactions to the ball and overall effort was very good,” King said. “I thought we excelled up front, and even though we weren’t challenged a lot in the passing game, I thought our defensive backs did a good job of not letting any receivers get behind them, while also being disciplined enough to come up and support the run defense.”
“Once again, I think it was a very good effort for our first game with a lot to build on.”
After reviewing film over the weekend, King felt pretty good about his team’s offensive production as well. Final stats show the Wildcats put up 382 yards of total offense. Most of that came in the running game and the short passing game, behind a very solid performance from the offensive line.
Feature back Kyemonte Walker was the biggest beneficiary of the offensive line’s efforts. The senior finished the game with 207 all-purpose yards and a touchdown. He rushed 21 times for 111 yards and caught five passes for 96 yards. He had a big run for a TD called back on a penalty, but caught an 18-yard pass out of the backfield from senior quarterback Derrick Grice for the Wildcats’ first score of the season.
Grice had a solid night as well, finishing with 226 yards on 20-of-33 passing. He had connected on two touchdown throws, with the second one coming on a well-thrown 24-yard pass to senior Dylan Lawrence in the fourth quarter. He did throw two interceptions and lost a fumble, but had more bright spots than negatives. He did a particularly good job of keeping plays alive by scrambling and finding open receivers for nice gains.
Senior P.J. Grayson accounted for 32 yards on seven catches. Most of those catches were on short ‘shovel’ passes behind the line of scrimmage that turned into solid gains for the Wildcats.
Junior Santez Campbell had three catches for 15 yards, while senior Tagg Creech had two grabs for 24 yards. Senior Larue Weaver added a 20 yard reception.
“I think we are getting really close to where we need to be on offense,” Coach King said. “We were overly aggressive sometimes running the football and we need to work on better ball security, but the mistakes we made were fixable.”
“We had a few blown assignments, but less than you would expect for week one of the season.”
Defensively, several Wildcats stood out. Junior middle linebacker Noah Lewis finished with 10 tackles and a forced fumble. Junior defensive tackle Blake Daughdrill was a force inside and finished with 7.5 tackles.
Sophomore linebacker LaDon Woullard continued his high energy play and ended the night with seven tackles, a sack and a forced fumble. Senior Anthony Blakely had seven tackles and an interception.
Senior Dylan McDonald finished with 5.5 tackles and both a caused fumble and fumble recovery. Junior Isaac Byrd had 4.5 stops, with Alex McGee finishing with four tackles and senior Garrett Hicks adding 3.5.
Battle for the Bell set for Friday night

The Wildcats hope the win over West Lauderdale will give them some momentum heading into this Friday’s annual rivalry match with George County. It’s a game with a lot of meaning for players and fans, but carries a little extra weight this year as it marks the first time Coach King will go up against his alma mater and former employer as a head coach.
The rivalry has been pretty even over the past two decades, but the Rebels hold the advantage in recent years, having won three straight dating back to the 2014 season.
The Rebels got off to a slow start to this season, dropping their first game of the season to Gulfport, a team coached by Greene County native Eddie Pierce. Second-year Rebel coach Matt Caldwell’s team struggled with their new offense against the Admirals, committing five turnovers en route to a 26-7 loss to Gulfport. A fumble recovery returned for a TD accounted for the Rebel’s lone scoring play.
The annual Battle for the Bell is set for a 7 p.m. kickoff Friday at Johnny Ainsworth Field.
Senior quarterback Derick Grice delivers a pass behind the protection of Kyemonte Walker during the Cats’ season opening win over West Lauderdale.
Photo by Shelley Mitchell 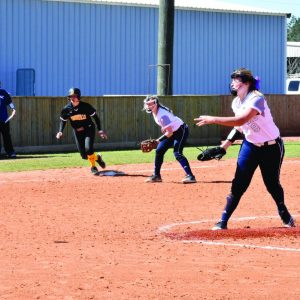 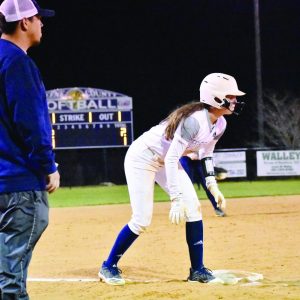 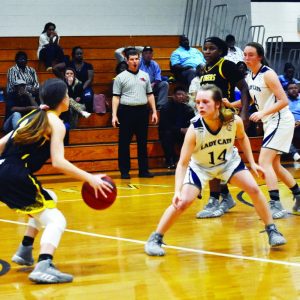 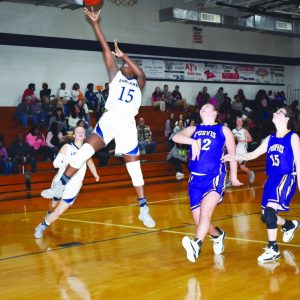