By RUSSELL TURNER
Herald Editor
The man whose name is synonymous with Greene County football has coached his last game as the top GCHS Wildcat. Longtime coach Johnny Ainsworth advised school officials last week he was planning to retire at the end of this school year. He shared the decision with his players Monday afternoon.
The announcement sent shock waves across the county as Ainsworth seemed locked in on returning for his 21st season at the helm for the Wildcats. When asked about his decision Tuesday morning, Ainsworth simply said it was time for a change.
“My wife and I decided that it was time for me to retire from coaching,” Ainsworth said. “There were a lot of different personal and professional reasons that played into that decision.”
“I am looking forward to spending more time with my family, but I am definitely going to miss this place and the daily interaction with the kids and the people I have grown so close to over the years at this school and in this community. Greene County has been very good to me.”
That relationship has been very good to Greene County as well. Prior to Ainsworth’s arrival at the school in 1997, GCHS had suffered from inconsistency under a host of different coaches. Ainsworth immediately turned that around, posting a winning season that included a 38-13 win over North Hancock in the 1997 Shrimp Bowl.
Former Greene County Supt. of Education Richard Fleming was the assistant principal at the school when Ainsworth was hired. Fleming said several candidates applied for the position at that time, but the clear choice was Ainsworth. Little did Fleming or any of the other school officials know how big a decision that was at the time.
“There was no doubt Johnny was the best fit for our school, but it is still amazing how big a difference he made from the very beginning,” Fleming said. “We couldn’t have hired a better person.”
“Coach Ainsworth has been a great example for our kids. He is a quality man and he’s done so much for our school and football program that we can never fully repay him.”
The man who now finds himself in the unenviable position of having to replace Ainsworth agrees.
“There is no way to replace Johnny Ainsworth,” GCHS Principal Scott Bray said Tuesday. “If there has ever been a Mississippi high school coaching ‘legend’, Johnny Ainsworth is it.”
“The impact he has had on our students and the impact he has had on this community as a whole is significant. His legacy is second to none. He is a true Wildcat who is loved and will be missed by all of us in the Greene County School District.”

Listening to Ainsworth talk about former players and coaches, and seeing the detail with which he describes some of the more memorable games during his 20-year career at the school, it is clear he is going to miss GCHS as much as the school will miss him.
The end of spring practice will draw to close a 36-year coaching career in Mississippi and Alabama. During that time, Ainsworth spent 23 as a head coach, with all but three of those at Greene County. He was also the head coach at Clara in the 1980s and posted an undefeated season with the Whippets while there.
After getting to a post-season bowl game in his first season at GCHS, Aisnworth’s teams were regularly among the state’s most successful. Beginning in 1999, GCHS made 15 straight appearances in the MHSAA State Playoffs. After losing seasons in 2014 and 2015, Ainsworth and company made it back to the postseason in 2016. Overall, Ainsworth has 167 wins as a head coach and compiled a 145-95 record at GCHS. His Wildcat teams competed for two state championships, winning the 3A title in 2014 and playing for the 4A title in 2012. Prior to the beginning of that last South State Championship run, officials at the school honored Ainsworth with the dedication of the school’s football field in his honor.
Despite that success and the Johnny Ainsworth Field sign overlooking the stadium, Ainsworth remained humble. That humility and graciousness became trademarks for the longtime coach throughout his career at the school and both were evident this week when he discussed hanging up his coaching whistle.
“It’s really not about me and never has been,” Ainsworth said. “It’s about the players I’ve been fortunate enough to coach over the years and the great assistant coaches I had by my side.”
“I knew there were talented athletes in Greene County. And, when I arrived, the kids response was great. The setting was here, they were hungry. We just had to sell them on the program. We did that, the players and community bought into it and we had a great run.”
Ainsworth said the fan support remains one of the most impressive things about his time at GCHS. He fondly recalls making many long bus trips only to arrive at their destination to what often felt like a home crowd.
“One of the most amazing things to me about this place has been the response from the fans,” Ainsworth said. “Most Friday nights, even when we were on the road, our crowds would be bigger than the home field crowd.”
“Greene County folks love their football and love supporting their Wildcats and that makes it special. That atmosphere allowed us to grow a program that helped a lot of kids be a part of something that helped them grow into solid young men. We’ve had kids that got to further their educations because of it and we’ve had a few that were able to pursue the dream of playing professionally as well.”
In all, over 30 players signed collegiate scholarships and played at the juco and Div. I levels. Three spent some time on professional rosters. Those three are Alton McCann (Class of 2001) and Cameron McLeod (2010) and Eric Sims, who was a member of Ainsworth’s first team and helped kick start the Wildcat football resurgence.
“Things really took off with that Shrimp Bowl win way back in 1997,” Ainsworth said, while reminiscing about many of his former players. “Since then we’ve had a lot of great young men come through here and they had the opportunity to play in a lot of big games, make some great trips to play bigger schools and even compete for championships.”
“It has been a fantastic ride.”
Indeed it has, coach.
What lies ahead for the Wildcat football program is unclear, but Bray said the search for Ainsworth’s replacement will be an open search and will begin immediately. Whoever gets the job will have big shoes to fill.

Wildcats moving on to face mighty Sumrall in Round 3

Lady Cats roll on to Round 2, while GCHS baseball has work left to do to advance

Wildcats closing in on first region baseball title in a decade 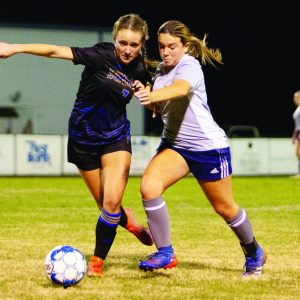